How to Invest in America's Crumbling Infrastructure

America is Crumbling... Time to BUY!

At least those who bothered to leave the house, anyway.

As for me, I layered up, gave my Prius a few minutes to warm up, and ventured downtown, where the common sight of intersection panhandlers was unsurprisingly absent.

On the radio, a press release issued by PJM Interconnection was recited. The morning reporter asked those in the listening area to conserve electricity, as a power outage in this kind of weather could result in deadly consequences. Especially for the elderly.

Of course, I doubt many folks even heard the announcement. And of those who did, few would actually heed the warning.

I'm not particularly worried though. I've done enough research on this stuff to know that it would take an enormous amount of pressure from consumers to put enough strain on the grid to knock it down. And the truth is, even if it does get dicey, the gatekeepers will simply lower the voltage in order to keep things humming.

Still, basic conservation efforts — like turning off the lights in unoccupied rooms or running the dishwasher during non-peak hours — probably aren't going to break anyone.  In fact, if done regularly, they can actually save you a few bucks.

But I'm not writing you today to talk about common sense measures to save money. Instead, I want to talk to you about how a growing trend of more extreme temperatures is exposing us not only to the elements, but to new opportunities to make a lot of money as well.

Over the past few years, we've had the opportunity to make a lot of money in sectors that have been impacted by extreme weather events.

Capitalizing on high oil prices following destructive hurricanes has been especially fruitful. But with this cold weather comes another, more long-term opportunity.

You see, temperatures fluctuate all the time. And with those fluctuations come fluctuations in price. This is great for trading, but if you're looking for a more stable play on extreme temperatures that'll take you over the long haul, there's a better place to look. 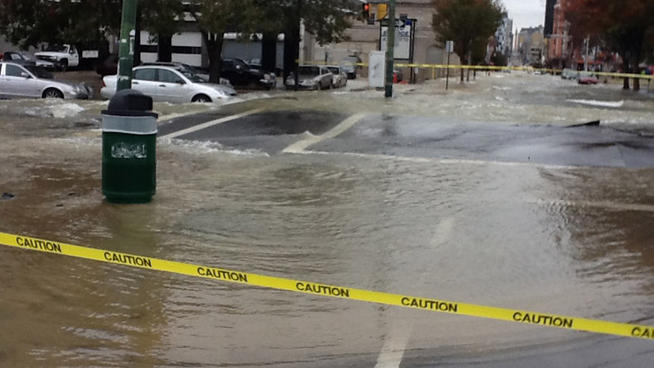 Old water pipes hate extreme cold temperatures — particularly those pipes sitting below much of this nation's streets that are more than a century old.

Last month, I told you about a conversation I had with an engineer named Tom Gilly.

When asked about Baltimore's water infrastructure, he said the following...

“There's still some old wood pipes down there. That means they're more than a hundred years old. And the rest of 'em are so busted up, I don't know how they're gonna fix all of 'em. 80 percent of these things are being held together by decades of grime and a whole lotta faith in the skills of our grandparents.”

After a handful of serious floods last summer, followed up by below-zero temperatures this week, the water infrastructure sector is very, very busy. And it's only going to get worse (or better, depending upon which side of this crisis you're on).

You see, last year, the American Society for Civil Engineers (ASCE) released its 2013 report card for America's water infrastructure. It got a D!

According to the ASCE, much of our drinking water infrastructure today is nearing the end of its life. There are an estimated 240,000 water main breaks every year in the U.S. Assuming every pipe would need to be replaced, the cost in the coming decades could reach more than $2 trillion.

My friends, on top of century-old infrastructure, throw in a growing trend of extreme temperatures and catastrophic floods, and you've got the recipe for both a major crisis and a major opportunity.

And while we can't personally control the crisis, we can capitalize on the opportunity by picking up a few quality water infrastructure plays.

Here are some of the leading water infrastructure stocks I like:

I'm not saying to go out and buy every water infrastructure stock out there. But at least put these four on your watch lists.  Because make no mistake about it — much of the water infrastructure in this country is crumbling. And as investors, we'd be fools to ignore this reality.