Gold is Desired, but Silver is Vital

Silver was one of the top-performing assets in the metals bull market.

Then the silver market went to hell.

Since then, silver has seen a sharp and fast decrease in price, recently pushed to near six-year lows. Closing just above $14 on Friday, silver prices haven't been this low since President Obama first took office.

Growing financial and security concerns around the world coupled with discounted prices have recently sent a storm of investors into physical silver. Over the summer, the U.S. Mint actually had to suspend sales of the American Silver Eagle because demand was too high.

For 2015, silver coin demand is forecast to increase over 20% to a record total nearing 130 million ounces.

It's expected that coin demand will account for about 12% of total physical silver demand this year — up from 10% in 2014 and a big jump from just 4% a decade ago.

Stronger physical demand coming from investors is important because the silver market is already relatively quite small. And silver is more than just an investment metal — it's also one of the most important metals to modern technology.

People tend to focus on physical bullion when they talk about silver. But in many ways, we can consider silver as an "industro-precious" metal. That's because industrial fabrication actually accounts for about 56% of world silver demand.

Compare that to gold: Only 8% of total gold demand currently goes to industrial use.

What this means is that while gold is certainly a highly desired metal, silver is a vital commodity to modern society.

And it's a commodity that the world constantly devours in massive amounts.

Every day, the world consumes nearly 3 million ounces of silver. Melted down, that would produce a single seven-foot cube.

But silver is different. It's very common for silver to get tossed out without being recycled.

And we're not talking about a case of empty beer cans from the weekend that don't make it into the recycling bin. We're talking about millions of dollars' worth of silver getting tossed out with the dirty cat litter every single day.

Consider just one piece of technology no one can seem to live without: the cell phone.

A single cell phone only contains a small bit of silver. The USGS estimates that a typical cell phone contains about 0.35 grams. But cell phones are as common as taxis in New York. There are about as many cell phone subscriptions around the world as there are people.

In the U.S. alone, 130 million cell phones are retired each year — with almost 1.5 million ounces of silver inside.

And that's just cell phones in the U.S.!

In 2014, The Independent reported that there are officially more mobile devices than people in the world. And silver demand coming from mobile devices is still just the tip of the metal's industrial demand iceberg.

Some reports suggest that up to 50,000,000 metric tons of e-waste is disposed of worldwide every year, much of it containing silver and other precious metals.

Moving forward, silver consumption is expected to climb. Along with current industrial fabrication, there are hundreds of new applications for silver that have the potential to significantly increase demand.

The world's governments have already figured all this out.

For the past several years, silver sales from government stockpiles have been falling. And the past two years have seen absolutely no government sales at all! 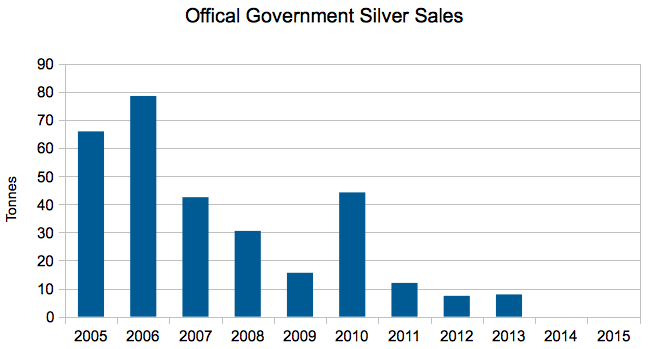 This means the market has had to rely on the mining industry for silver supplies more and more.

Silver supplies from mine production have been increasing year after year. However, the ability of the world's silver producers to increase production is limited.

Silver supplies from mining will have increased about 0.25% this year over 2014. Compared to the average annual increase of about 4% over the past 10 years, however, it appears that the rise in silver mine production might be stalling.

According to GFMS, divestment in the mining industry will cause a peak in silver mine supply in the next year or two!

Everything looks right with silver. I think prices are currently being temporarily dragged down along with gold as the Fed's rate decision draws closer — which means right now is the perfect time to free up some cash reserves to put some money back into the silver market.

Over the next couple weeks, I'll be taking a look at a few different silver investments and will show you some easy ways to leverage rising prices.

A move closer to $20 an ounce is not out of the realm of possibility for silver in 2016. And I've already got some ideas on the burner that I'm looking into more closely. I'll get back to you soon.