Investors are looking at the market through rose-colored glasses.

Last week, the Federal Reserve said it would like to raise interest rates four times next year. This got the market buzzing.

But investors seem to forget that the Fed said the same exact thing this time last year... and only raised rates twice, with the latter most likely being very politically motivated.

Still, talks of more rate hikes have moved long positions into the U.S. dollar and out of gold.

Outflow from gold ETFs is breaking records. More than $5 billion has been taken out of gold ETFs over the past several weeks. This morning, Mining.com called it “the great year-end ETF liquidation sale.” 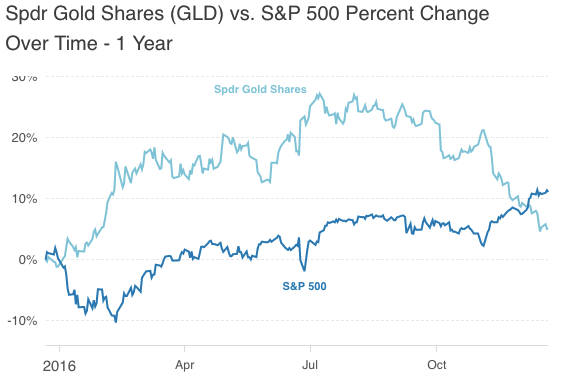 The greenback currently sits at a 14-year high. But these levels are also being heavily supported by severe currency problems elsewhere around the world.

Starting on the day of the U.S. election, more than half a dozen countries made rapid moves toward cashless economic systems.

The first step has been demonetizing the largest currency notes. As a result, there has been a mad scramble to make deposits in these countries.

In most places, there are limits on deposits — and if you're depositing a bunch of cash, the government wants to know where you got it...

In some countries, there are now restrictions on how much one person can deposit at a time. This is creating a huge demand for safe foreign currencies like the U.S. dollar in places like India and Venezuela. And this demand is helping push up value.

But it's only short term. The U.S. dollar is only being used right now in places like India to move wealth around. The Indian government's plan was to stop the rupee from being used in the black market. And it's working. But it just opened up the door for the U.S. dollar to be used more.

So what this boils down to is investors buying the U.S. dollar right now into false value created by demand for short-term wealth exchange and hedging use. And it will probably continue in the short term. But every dog has his day...

Meanwhile, the U.S. national debt is approaching $20 trillion. And then there's Trump, who plans to add another $5 trillion to the tab.

The U.S. dollar and markets are overvalued, and investors buying it today are going to get burned in the long term. Gold is still a great long-term buy.