Investors are buying gold at levels not seen since the financial crisis.

The World Gold Council recently reported that gold investment demand was up 27% during the third quarter (year-on-year) — highlighted by gold coin demand, which shot up a whopping 111%!

In total, investors purchased nearly 2.5 million ounces of gold during Q3 2015 — the second-highest quarterly total ever recorded by the WGC.

The demand for gold coins is so strong that the U.S. Mint has had difficulty keeping up, with some bullion coins sold out for the year. Mint sales of the American Gold Eagle coin series have already increased by 52% (by weight) over 2014.

And the year isn't through yet.

If you decide physical gold coins are a good option for your investment portfolio as well, here's one of the first things you should know...

Stay Away From Gold Numismatic Coins

There have been countless individuals who've made millions of dollars in the business of upselling investors into numismatic (collectible) gold and silver coins.

Don't get me wrong — I love numismatic coins for their history, rarity, and beauty. But numismatic gold coins are not good investment vehicles.

The most collected gold coins are pre-1933 U.S. gold coins, with the most classic example being the Saint Gaudens Gold Double Eagle. 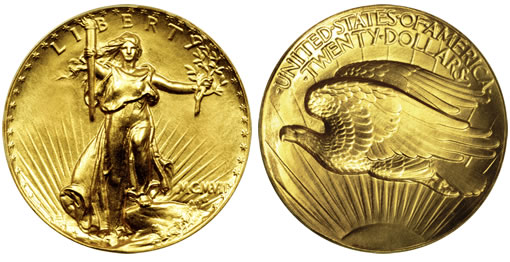 The Saint Gaudens Gold Double Eagle is one of the most highly sought-after gold coins in all of numismatics — which means high premiums over gold spot prices are sure to be attached.

A St. Gaudens Double Eagle with a very common date and condition will sell for about 20% to 25% over gold spot prices right now. That's about four or five times higher than the premium for a common gold bullion coin like the American Gold Eagle.

And that's a cheap one. You'd have no problem finding a St. Gaudens Gold Double Eagle with a rare date or condition with a six-figure asking price. At this level, the actual metal content in numismatic pieces plays only a minor role in a coin's value. And as investors, this is what we want to avoid.

Buying numismatic gold coins like the St. Gaudens Eagle as an investment is a long play on the coin-collecting market more than it is on the gold market. And investors really only want to strictly own bullion gold coins.

But here's where it can get a bit tricky as slick coin peddlers make big sales...

Some Bullion Coins Can be Considered Numismatic Pieces

Generally, collectors want coins that have been authenticated, graded for condition, and sealed in a hard plastic case for protection (called “slabbed”) by a third-party coin grading company.

These third-party graders will evaluate nearly any coin. And it's not uncommon for collectors or resellers to submit bullion coins like the American Eagle to firms like NGC or PCGS for authentication, encapsulation, and grading.

Collectors and resellers want these third-party coin grading companies to give their bullion coins high grades, which generally relies mostly on condition — the better the condition of a coin, the higher the grade.

And the higher the price.

Here's exactly what I mean...

On the left is a loose, ungraded 2015 American Gold Eagle. Right now, you can expect to pay about 5% over spot price for this coin, depending on where and how many you buy.

On the right is the same exact coin, except it has been authenticated, slabbed, and graded MS 70 (the highest uncirculated grade for business-struck coins) by NGC, one of the two premier third-party coin grading companies. This coin will carry a premium over spot of 15% to 20%.

... Is still the American Gold Eagle.

As the official gold bullion coin of the United States, the American Gold Eagle is the most recognized bullion coin in the world.

The premiums for American Gold Eagles are relatively low compared to coins from the silver series. When buying, expect to pay a premium of about 5% over gold spot prices right now.

The safest way to buy gold bullion immediately remains through one of the U.S. Mint's authorized dealers. The Mint's dealer locator can be found here. If you don't mind waiting or paying shipping costs, two of the most well-known online bullion dealers are apmex.com and jmbullion.com