Giving the G20 the Bum's Rush

Letters to the editor from well-dressed academics don't make for juicy newsclips. Projectile-throwing anarchists are a different story: 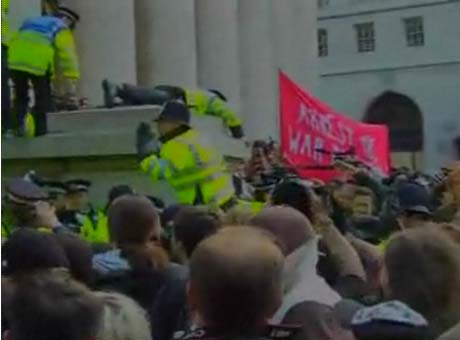 This image I captured from video of Wednesday's demonstrations in the City of London's financial center only shows the chaos, but not the points peaceful marchers have made... Dissatisfaction is the tie that binds all ends of the political spectrum these days.

In an open letter to the Financial Times, a prestigious group of executives and academics has laid out four main objectives they'd like to see initiated at the G20 Summit.

1. Quick steps toward growth restoration while mitigating risks in the financial system.

2. Reform of institutions and proper direction of resources to ensure the institutions responsible for kickstarting credit and fighting deflation do so in a sustainable manner.

The signatories include Nouriel Roubini, who predicted the current turmoil and says it may well become a painful, "L-shaped" recession if the above steps aren't taken.

You can read the whole letter here, but the intent by these heavyweights and many policy directors seems to be a destruction of the boom-bust cycle many took as a fact of economic nature.

In energy, especially, we know the capacity for boom-bust cycles to create and destroy great wealth. Individual energy cycles also have much broader ranging effects than ever before: The rapid rise of oil prices fostered greater interest in biofuels, which in turn hit food consumers hard where energy feedstocks and provisions overlapped. So expensive oil, we might say, caused corn tortilla riots in Mexico. Yes, there were tortilla riots in Mexico.

Whether it's for the lone goal of preventing bricks thrown through the windows of bank headquarters worldwide, or if a more community-based approach to finance actually becomes the international consensus, we should hope for considerate but deliberate action from the G20.