The gasoline sector may have some stiff competition ahead in the form of natural gas.

According to projections from the International Energy Agency, natural gas will become a common fuel source within the next five years. The spike can be credited to a massive shale boom in North America, which has lowered the value of natural gas and has made it a cheaper alternative to conventional gasoline. 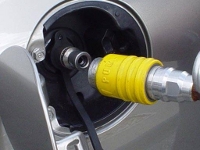 The United States will continue to be a top supplier of natural gas in the world, and it currently makes up one-fifth of the world’s growing natural gas production, according to Market Watch.

Overall, natural gas demand is set to rise over 15% in the next five years, and China will account for 30% of the world’s rising growth.

The economic downturn in Europe will slow down the need for natural gas imports. Nations in Europe will continue to rely on coal to meet energy needs on the cheap.

According to Natural Gas Vehicles America, a trade association, there are 15.2 million natural gas vehicles in use worldwide, most of which are concentrated in the Asia-Pacific region. Asia is a heavy consumer of natural gas and liquefied natural gas (LNG).

Iran, Pakistan, Argentina, Brazil, and India were the top five nations in the world with the highest number of natural gas vehicles in 2012.

Brazil and Argentina have a high amount compressed natural gas (CNG) vehicles due to government investment and prevalent use among taxi cabs. Iran’s tense standoff with the West over its nuclear program has also forced the country to build a strong CNG presence to combat international sanctions and higher imports.

India specializes in mixed natural gas and gasoline engines so people can rely on traditional fuel if there is no CNG station in the immediate vicinity. And Pakistan is in the midst of slowly phasing out its CNG use because of energy shortages around the country.

But when it comes to future growth in natural gas vehicles, it is important to follow China, the U.S., and Canada. The U.S. and Canada are the only two commercial shale gas producers in the world, and China may not be far behind.

China may be a heavy consumer of oil and coal, but the government is getting tougher on its environmental standards across the board – tackling pollution from cars, coal, and cement mixing.

China has the best of both worlds when it comes to the use of natural gas as a transportation energy source. With China’s manufacturing growth, there could be more of a need to fuel heavy-duty vehicles with LNG. CNG for private vehicle use could also gain popularity as more people in China enter the middle class.

There is plenty of talk about LNG’s value abroad, but it can be a valuable source in the U.S. if there is enough demand from the construction industry and the right investment strategy from the government. CNG cars in the U.S. market may take time to catch on, but there is a market for LNG to power heavy utility vehicles.

In the consumer market, the U.S. is heavy on gasoline consumption, but clean-burning cars are slowly making headway in the American psyche, as evidenced by the popularity of Tesla’s (NASDAQ: TSLA) Model S and other electric vehicles on the market. LNG vehicles may not be that far behind, as Clean Energy Fuels Corp. (NASDAQ: CLNE) continues to expand its network of LNG and CNG charging stations across the nation.

Canada has used natural gas as a transportation source for the last 20 years, using it to fuel buses and other heavier-grade vehicles. Natural gas has been on the decline in Canada after 1995, but the shale boom in that country could yield a resurgence of the commodity in the transportation arena.

Canada is currently the world’s third largest natural gas producer. If more pipelines are constructed in the future, natural gas could make a heavier impact in Canada’s transportation sector.

Honda (NYSE: HMC) is contributing to the natural gas fuel sector in a big way with the fully natural gas-powered Honda Civic GX, a car which has been generating plenty of buzz from the green community.

The GX was dubbed “Greenest Vehicle of the Year” by the American Council for an Energy-Efficient Economy for eight years in a row until 2011, and it was awarded “Green Car of the Year” in 2012 from Green Car Journal. It is being manufactured in Honda’s Greenburg plant in Indiana, and it is available for purchase in 35 out of 50 states.

Consumers have the option of going to a public fueling station – which are few and far between around the country – but buyers also have the more convenient option of affixing a compression station in their homes for refueling needs.

Oddly enough, the U.S. ranked sixth in the world for CNG stations as of 2010 – something that could be the seedling of a growing natural gas vehicle market in the future. That being said, natural gas vehicles do come at a higher price, and the GX is most likely to been seen in California and New York.

Nevertheless, Honda is making quite a splash in highlighting what natural gas can do for the alternative vehicle market.

Other companies on the radar include Westport Innovations (NASDAQ: WPRT), a company that provides the necessary technologies so natural gas powered vehicles can run efficiently. The company’s expertise lies in CNG, LNG, biofuels, and hydrogen in both light and heavy duty vehicles. The technology and engineering experience will be vital in allowing more companies to transition to natural gas fuel consumption with ease.

Royal Dutch Shell (NYSE: RDS-A) has had a project in the works as well, planning to invest $300 million in LNG stations for the trucking industry in the United States. Shell hopes to attract fleet companies by locking them into a guaranteed contract where LNG is 30% cheaper than diesel fuel.

Shell has already constructed various LNG stations across Canada. Of all companies, Shell has the most experience in dealing with LNG and natural gas as a vehicle power source, since the Anglo-Dutch company has some of the largest LNG operations in the world.