You can’t keep a good market down.

Over the last year, we’ve talked about a quiet boom taking place in clean energy vehicles.

The global fuel cell market is poised for some jaw-dropping growth ahead.

As it stands now, the fuel cell market is projected to grow at a CAGR of about 21% between now and 2025.

That’s a value of more $25 billion over the next seven years.

So, the question has now become, “Where are we going to see the real profits for hydrogen fuel cells?”

My money is on China, and yours should be, too.

This year, one out of every three cars sold on the planet will be sold in China.

Is that really surprising?

I told you back in January that it was clear China was going to dominate the EV market in 2018.

China’s focus on transitioning the country’s fleet of vehicles away from traditional fossil fuels has been razor sharp, to say the least.

More than a million electric vehicles are expected to be sold in China this year.

I know that may still seem like just a drop in the bucket at first. After all, vehicle sales in the Middle Kingdom surpassed 25 million in 2017.

The growth we’ve seen over the last five years has been nothing short of extraordinary: 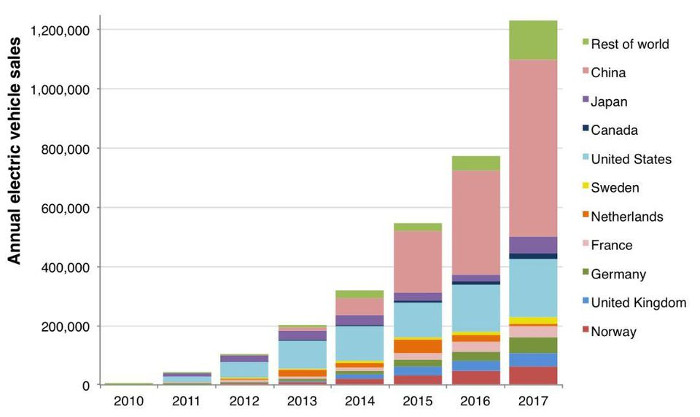 You can see why we’re looking closely at the Chinese EV market, right?

In a recent outlook, Bloomberg New Energy Finance (BNEF) projects EV sales to soar to 30 million units by 2030... and that date is a lot closer than you might think.

Of course, they know just as well as we do that China is going to lead this transition, with BNEF suggesting that the country will account for about half of global EV sales by 2025 and nearly 40% of global sales by 2030.

Right now, EVs account for a little less than 10% of China’s vehicle sales.

That’s going to change dramatically thanks to bullish domestic policies by the Chinese government.

But there’s a small catch that the market has largely ignored until now...

The EV revolution will be driven by more than lithium-ion batteries.

I know, I know. The moment you hear the words “electric vehicle,” your first thoughts are probably of Tesla.

And that includes hydrogen fuel cells.

Now, if you’ve been paying attention to hydrogen fuel cell technology, then you already know some of the advantages it holds.

However, you’ll also know that fuel cells are starting to gain a lot more traction.

The company is set to roll out 2,000 hydrogen-powered buses throughout the Shandong province.

Keep in mind that the first hydrogen buses didn’t start making their appearance on Chinese streets until earlier this year.

In other words, there’s a ton of growth ahead for these fuel cell vehicles.

That’s the kind of opportunity the smart money drools over.

And the last place investors should be right now is on the sidelines of this boom.

China is going to lead the charge in adopting hydrogen fuel cell technology.

This Friday, I want you to keep an eye out for a brand new investment report I’m releasing exclusively to Energy and Capital readers like you.

Inside, you’ll find the details behind a small company that just made some big moves in China as you read this, yet is still flying under Wall Street’s radar.