What isn't there to love about the 4th of July?

We've all come to hold some nostalgic view of this summertime holiday. The atmosphere is perfect for backyard barbecues, the all-too-often flame-ups and plumes of smoke billowing from a grill that isn't much safer than it looks.

It brings to mind quick dips in the pool to wash away a 106 degree heat wave. Back home in Pennsylvania, however, I can't help but think how some swimming holes aren't too inviting... 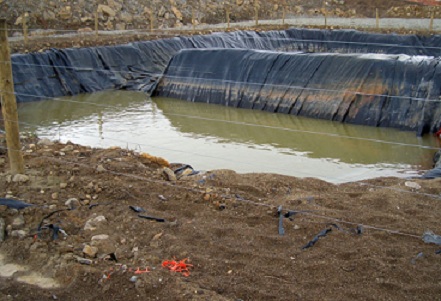 Now, I like to hope that my readers have enough sense to not stick so much as a toe in that water, but the bitter pill to swallow here is that these wastewater ponds are becoming a regular sight in the Keystone State.

Ever since the Drake well struck paydirt outside of Titusville, more than 350,000 natural gas wells have been drilled in the commonwealth of Pennsylvania. These wastewater ponds are also at the heart of the hydraulic fracturing debate.

What Can Slow this Gas Boom

We've raised the question of a slowdown taking place in the U.S. shale boom over the recent weeks.

And believe me, dear reader, it won't be from low natural gas prices or the crude price correction we've seen over the last few months. Truth is, there are simply too many benefits to developing our own resources.

The water crisis developing within the shale industry is the real threat. After all, we've learned that one single formation - the Barnett shale play - has used roughly half of a trillion barrels of water for drilling activities in only the last six years!

So, you can understand why some companies are looking for an alternative plan for their wastewater management... and that search is happening right now.

One of the major Marcellus players, Consol Energy, recently announced it was spending $500,000 in search of a solar solution to the water issue. The plan is to use solar energy to purify the water.

For Consol specifically, we're not talking about a few buckets here or there. The company has to deal with about 36 billion barrels of wastewater per year.

Whenever the hydraulic fracturing debate crosses my path, the amount of misinformation I'm told is absolutely staggering. I know the concerns well, and chief among them are the millions of gallons of water that are blasted into the rock formation. As for the large amount of wastewater that comes back up through the well... how many more ponds like the ones above will be needed over the next ten, even twenty years?

Yet every single time, my reply to them is the same: "Why don't you just take the water problem completely out of the equation? Wouldn't that solve your issues?"

The reproachful looks I receive are etched into my mind forever. Such a simple solution to a complicated process.

And yet, it happens to be one of the two key parts to unlocking the 542 trillion cubic feet of natural gas locked in these tight formations. Remember that these shale formations will account for nearly half of all natural gas production by 2035: 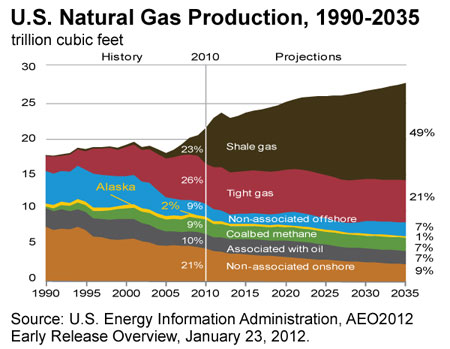 The fractivists tend to forget this part when formulating their next scathing attack in the mainstream media.

You want to see an end to the publicity war raging over the hydraulic fracturing process?

The smart investors are starting here.

Fracking 2.0: Firing the Silver Bullet in the Hydraulic Fracturing War
Insiders are calling it the next step of the U.S. shale boom – a win-win situation for producers and investors alike. You see, not only does this breakthrough fracturing technology increase production from shale wells, but Wall Street still hasn't caught on to its growing value. This investment report will give you all the details on this new opportunity.

$6 Trillion of Bernanke's Missing Cash: The Great Shadow Bank Run Meets the Dark Void of Deflation
What happened to the $8 trillion in stimulus? Where did the money go? The answer lies in the shadow world of the unregulated risk takers, the dark banks of Wall Street.

Dividend Investing: The Best Way to Profit When the Market Crashes
Imagine how easy things would be if massive companies like Wal-Mart were sending you rent checks every month for decades! For many of our readers, these opportunities are paying out heavily, delivering more than 18 times their initial investment. We'll show you just how easy it is to see the same kind of returns. Simply click here to learn more.

The Only Stocks Going Up: Restaurants, Groceries and the Beach
The baby boomers are not a monolithic market... They're spreading their cash among several surprising industries.

Solar Without Subsidies: This stock's going from $1 to $21
One company has pioneered a way to cut the cost of solar in half while doubling it's output.

Own Gold Now: Why Owning Gold Is More Important Than Ever
Publisher Brian Hicks explains why owning gold now is more important than ever.

Grid Parity is Here: Most Important Energy Event of the Decade
It's not just another solar company... It's the company that will make all solar panels - no matter who makes them - as cheap, or cheaper, than fossil fuels.

Solar and Natural Gas: Colleagues Not Competitors
Complementary interaction with renewables is a major market for natural gas. Conversely, a natural gas back-up helps solve the intermittent issues of solar and wind.