Fracking Around the World

Is Fracking the Same Everywhere?

One by one, states across the U.S. have said “yay” or “nay” to fracking.

In Texas and North Dakota, it was a resounding yes... and now North Dakota has the lowest unemployment rate in the nation, experiencing a bona fide black gold rush.

Vermont firmly said no, banning the practice for good. Of course, there isn't any significant shale located under Vermont, so few tears were shed.

Other states have been on the fence.

New York, for example, has been stalling in reaching a final decision. Just last week Governor Andrew Cuomo's administration opened the floor for 30 days of public comment on proposed regulations.

Right now, New York has a decision-making deadline of February 27, 2013, but the debate has been ongoing since a 2008 moratorium was set to expire in the summer of 2011. There's no telling when it will actually happen.

The heated fracking debate is not unique to the United States. Parts of Canada have banned fracking; Poland is considering shale development, though not without opposition; and France has banned the process outright.

Last week the UK lifted a similar ban: From here forward, Britain will be allowed to develop its shale.

Management consultancy Pöyry suggests that by 2030, only 58% of gas used will be from imports, compared to 79% without fracking.

But the reason fracking was banned to begin with was the two small earthquakes that rocked the region in Lancashire where Cuadrilla Resources had begun developing the Bowland Shale.

Thanks to these earthquakes, regulations surround the newly-allowed fracking, placing stringent restrictions on the amount of seismic activity considered safe in a fracked region. And companies might run into problems with these restrictions.

Meanwhile, the amount of gas trapped in the UK shale deposit is unclear.

Compare that to the United States, with an estimated 500 to 1,000 trillion cubic feet of recoverable reserves...

The real question everyone is asking now is: Can the UK replicate the U.S.?

If we consider cubic feet of gas per capita, the estimated reserves just about even out. But other factors play a much bigger role.

U.S. companies have years of experience in fracking and natural gas extraction. The boom that's at its height now began five or six years ago.

The U.S. also has multiple shale deposits with an abundance of natural gas, many of which are located in rural areas like North Dakota and Montana.

Where the U.K. has about 663 people per square mile, the U.S. only has roughly 89. Drilling will be much more difficult in such a densely-populated nation.

The removal of the UK's fracking ban might sound revolutionary for the nation, just as fracking has been to the United States. But don't forget that fracking is expensive: It costs millions per well — and requires millions of gallons of water to boot.

In the United States, the abundance of shale gas has led to lower prices and growth in demand.

The fuel is replacing coal in many power plants... companies are purchasing natural gas-powered engines for their fleets... and one company, Cheniere Energy (NYSE: LNG), has already been approved to export liquefied natural gas.

In the U.S., conditions were ideal to set the stage for these developments.

Soon, the shift in oil and gas development fracking caused will really take over. In just a few years, we'll be developing more oil and gas from unconventional sources than conventional: 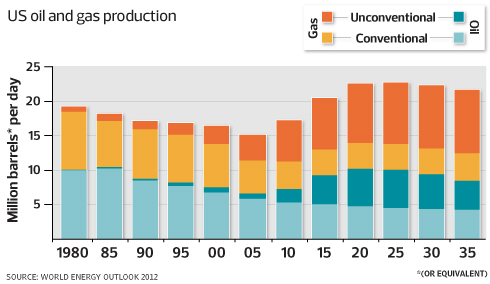 But the UK is not likely to reach the same abundant gas level the U.S. has achieved. The shale is different. There's less of it. And land for development is scarce.

Landowners can't even easily sell their property to fracking companies as they can in the United States.

As energy secretary Ed Davey said himself, until there are “a significant number of wells fracked and production patterns established over time, it will not be possible to make any meaningful estimate.”

In essence, the future is uncertain for Britain's shale development.