FOUR TIMES Bigger than the Bakken...

They Found the Source for All the Oil

According to his captain’s log, he noticed “long, colorful slicks of rainbows” and “black balls” floating in the ocean for miles...

He didn’t know it at the time, but these were oil slicks that were coming from natural seeps in the seabed and from surface seeps onshore.

In 1792, Captain Cook's crew reported the ocean near Goleta in the Santa Barbara Channel was covered with an oily surface in all directions. According to Vancouver, Cook’s navigator, the oil was so thick that the entire sea took on an iridescent hue.

Many other explorers reported similar sightings.

In February 2007, a large number of tar balls washed up on the beaches in Central California —from Monterey Bay north to Half Moon Bay and San Francisco.

Concerned California residents called state officials asking where these balls of tar might have come from, and whether they posed a threat to wildlife or affected the beaches. Overwhelmingly, people assumed the oil on the beaches was the result of an oil spill.

However, after taking several samples and analyzing the tar balls back in the lab, the U.S. Geological Survey concluded the oil came from fissures in the seabed off the coast of California.

You may recall in my recent article, "A Brief History of Oil," I wrote:

And ever since, oil and gas companies have used the observation of naturally occurring seeps to find massive oilfields.

That’s because typically where you see a seep, you find a highly-pressurized reservoir below. The high quality oil is literally being pushed out of the ground.

And you can see by this image from the USGS how seeps and oil fields are closely related:

A couple of weeks ago, CNN Money reported that “California could be the next oil boom state.”

You may remember when, late last year, California Gov. Jerry Brown pushed for a top state regulator to ease regulations for energy companies seeking to drill for California's oil. The official refused.

A week later, Brown fired the regulator — along with a deputy, Elena Miller.

The governor appointed replacements who agreed to stop subjecting every fracking project to a top-to-bottom review before issuing a permit.

Jerry Brown knows what's at stake... California could have more than four times the recoverable shale oil than the Bakken in North Dakota. It has more than 4.5 times the reserves of the Eagle Ford Formation in Texas. And it has nearly ten times the shale oil reserves in the Avalon and Bone Springs Formation in New Mexico and Texas.

According to the same EIA report:

The next largest shale oil plays are the Bakken and Eagle Ford, which are assessed to hold approximately 3.6 billion barrels and 3.4 billion barrels of oil, respectively.

This is important — because geologists have concluded that the Monterey Shale is the "source rock" for Southern California's oil production.

In other words, the oil was cooked and created in the Monterey Shale.

Over time, the oil migrated into surrounding oil reservoirs, where it's been drilled for a century. 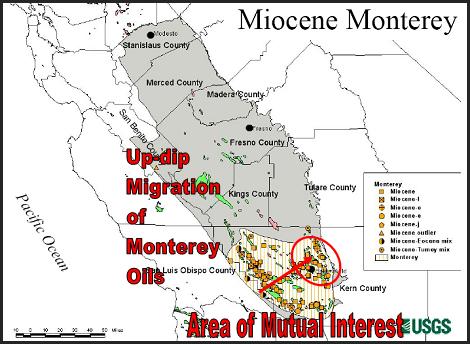 For the past 100 years, California has been a major oil producer, and most of that oil was produced by the Monterey Shale.

Now oil companies are going to the source...

The results could be an absolute bonanza.

I say “could” because California doesn’t have the same friendly business environment as Texas and North Dakota... but we’ll see.