After February 10, 1916, for better or worse, North America would never be the same.

You see, deep in the jungles of Veracruz, Mexico, they were searching for oil. Drilling had commenced several days earlier and had reached a depth of 1,752 feet.

Then it happened — the boredom was suddenly interrupted. A blast of crude exploded up from the well, destroying the derrick and ejecting drilling tools up to 120 feet away.

For nine straight days, the gusher shot higher and higher, finally reaching an estimated 598 feet and raining oil as far as two miles away.

This was the famous Cerro Azul No. 4 well, which was in the Golden Lane Trend of the Tampico-Misantla basin. Since that historic gusher, this basin has produced over 5 billion barrels of oil.

Most of it was extracted by the late 1930s. Since then, flows have reduced to a trickle, and the basin has become a low priority for Mexico’s state-run oil company, Pemex.

The company figured most of the oil was gone, so it moved on to other projects.

But It Was Wrong About Tampico-Misantla 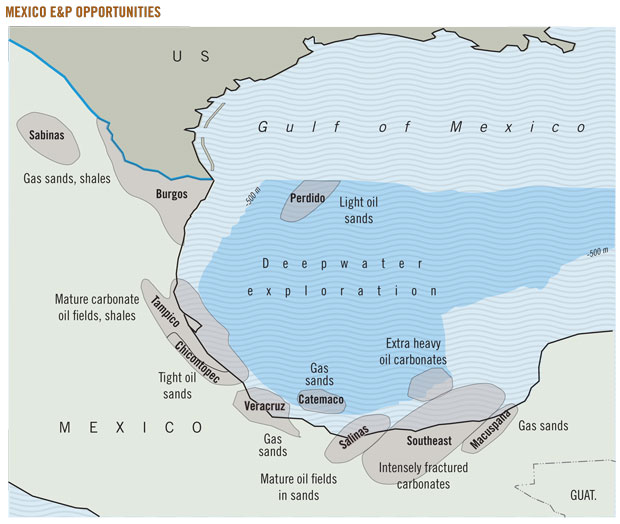 In fact, there’s at least another 5 billion barrels of oil waiting to be tapped there, according to IHS Markit.

And all that oil is about to do for Mexico what the Bakken did for the U.S.

In fact, the geography is very similar to the super-rich fracking fields of the Permian Basin of West Texas, which sits just over the border.

The state-owned oil company Pemex has had full control of the Mexican oil industry since it was nationalized 75 years ago.

As you can imagine, it was full of corruption and malinvestment. Pemex didn’t reinvest in new technology or refineries, and starting in 2004, oil production has been in decline. It hasn’t made a profit since 2012.

You see, Pemex lacked the skill necessary to pull oil out of its mature fields. It needed frackers and horizontal drillers with experience, like those small companies in the U.S. and Canada.

To solve this problem, Enrique Peña Nieto’s government somehow managed to end the state monopoly. He welcomed the world's oil companies and held the first auction of oil-rich licenses two years ago. At the time, July 15, 2015, the price of oil was just bouncing off its lows of $28 a barrel.

No one wanted the blocks, and 12 of 14 went unsold. Those that did sell went on the cheap.

I’ve discovered one micro-cap company that won a bid on a prime block of Tampico-Misantla property.

I’ve spoken with the CEO and have plans to head to Veracruz when the first drill is struck this fall. The company has experience in fracking and reducing costs of production. The more fields it wins, the better its bottom line and the higher its share price.

In Mexico, the cost of production can be as low as $13 a barrel. This is because the fields are mature, inland, and shallow. Infrastructure such as roads, pipelines, railroads, docks, and refineries have already been built, and salaries are well below the U.S.

This situation reminds me of the 759% gain from Petro Matad, a Mongolian oil play, my Crisis and Opportunity readers made a few years ago.

The next oil auction is coming on July 14 — that’s this Friday. The $0.32 company I’m talking about has plans to add to its first block. If its plans are successful, it will be a catalyst for share price appreciation starting as soon as next week.

The market cap is low, and the float is thin. Any positive news will send this stock higher. Read all about it here. In four days, this opportunity will be over.

Iraq Rises
Energy and Capital editor Christian DeHaemer gives you his notes from the Iraq Oil Conference.
Mexico Can Finally Afford Trump's Wall
Energy and Capital editor Keith Kohl shows readers why Mexico's oil industry may be in for the boom of a lifetime...
Biggest Oil Boom Since 2001
Energy and Capital editor Christian DeHaemer gives you the straight dope on oil prices (from the past and for the future) and big American cars...
Hydrogen Fuel Cells: The Downfall of Tesla?
Lithium has been the front-runner in the battery technology market for years, but that is all coming to an end. Elon Musk is against them, but Jeff Bezos is investing heavily in them. Hydrogen Fuel Cells will turn the battery market upside down and we've discovered the tiny company that is going to make it happen.