When Big Oil Gets Jealous of Your Profits

The question has never been whether or not the United States has passed its peak in oil production...

That moment in history happened already — more than forty years ago.

And let's be honest here, have you ever met anyone who believes U.S. domestic production will ever reach 9.6 million barrels a day — or even close to that?

That alone would be enough to make us bullish over natural gas.

Can you think of an easier transition from our oil addiction than natural gas?

Even decades from now, renewables may not be in a position to take over.

According to the EIA's upcoming Annual Energy Outlook 2011, 83% of our energy supply is from fossil fuels. Furthermore, by 2035, that gap will still be 78% weighted toward oil, coal, and natural gas. Combined, renewables and nuclear energy make up less than 20% of our total energy consumption.

Some of the biggest oil and gas companies in the world are finally recognizing the opportunity here...

And they're taking investors along for the ride.

When one of the supermajors catches the scent of money, they all fall in line.

After the tremendous success seen in the Barnett formation, they've been scrounging the U.S. for shale assets. It's not just some random experiment by these guys, either; they're all trying to get a piece of the action...

It doesn't take a crystal ball to see what these supermajors are after...

But are shale assets really that profitable for the average investor?

Though Exxon may have raked in $383 billion last year and $310 billion in 2009 (a pretty penny, to be sure), you'd be surprised at how little investors actually made.

Although oil producers — specifically the U.S. shale drillers — are the darlings of the U.S. investment community right now, natural gas is shaping up to be the sleeper pick of 2011.

Because no matter how many times I watch the supermajors pile in the shale markets, I can't help but think they're an underwhelming investment...

If this were 1985 and I had my flux capacitor handy (along with a good 25 years to hold onto my position), I might change my tune. But with the slight exception of ConocoPhillips and Chevron, the rest of the group's performance has been anything but "super" during the last two years: 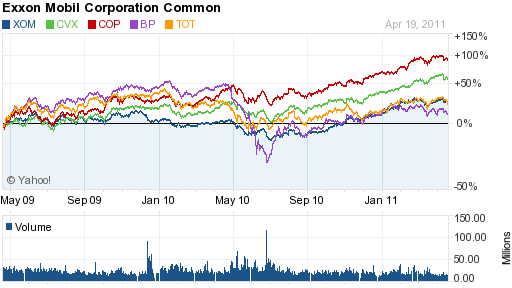 If you bought shares of ExxonMobil in the beginning of 2009, you'd be up a whopping 10% right now. In that same time frame, BP is up a massive 5%.

But hey, we can give them a break, right? After all, BP had to deal with the clean-up efforts for the largest oil spill in history.

These are supposed to be some of the best and biggest public oil and gas companies in the world. And don't forget crude prices have jumped over 200% in the same period...

Fortunately for us, there are simply better opportunities out there.

You don't need to have a 422 billion market cap like Exxon to make investors a small fortune. Take this small shale company, for example.

These guys just set up shop in the heart of the U.S. shale industry. Their new technique in fracturing the shale formations is drawing a lot of interest, mainly because the process uses absolutely no water and can even be more efficient than the typical hydraulic fracturing process.

Of course, it also helps when you share a water cooler with one of the best traders in the business — a luxury I try to take advantage of every week.

When I mentioned shale gas this morning to my colleague Ian Cooper, he gave me a knowing smile...

When pressed for more, he told me that his readers are already pulling in gains from their exposure to the U.S. shale gas markets. The best part is this company has already made more money for his readers than those BP and Exxon investments I just mentioned...

Ian plans to release his full report on this opportunity soon, so keep an eye out for it to hit your inbox.

P.S. For those of you who don't want to wait to capitalize on Ian's shale gas opportunity, take full advantage of his current trading success today.