Arizona-based solar energy company First Solar (NASDAQ: FSLR) posted its first quarter 2014 earnings, showing a year-over-year increase in net sales, profit, and net income. The company did better both sequentially and when compared to the same quarter last year, bringing the numbers closer to the peak spike First Solar enjoyed in the third quarter of 2013.

Overall, revenue and earnings growth for the company were solid, and the company raised its full-year guidance as a result. So why are shares dropping?

In raw numbers, here's how First Solar performed in Q1: 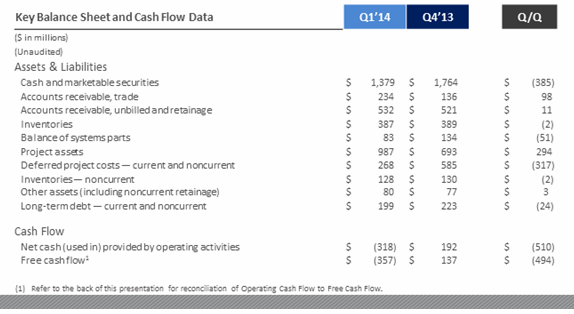 Analysts had expected the company to pull down $0.56 per share on revenues of $837.95 million, so by most accounts it was a good quarter for the solar energy company. First Solar's revised guidance for 2014 is a range of $2.40-$2.80 per share, and analysts continue to expect $2.49 per share.

Still, First Solar CEO James Hughes said, “We are less focused on revenue as a metric, and more focused on margin per watt production. Module prices are stabilizing and our costs continue to fall.”

This is because significant changes in revenue and profit can be driven by payments rolling in from previously booked projects. In the first quarter, for example, revenue and sales were both positively affected by the Campo Verde project, which was first sold more than a year ago to Southern Power and Turner Renewable Energy. 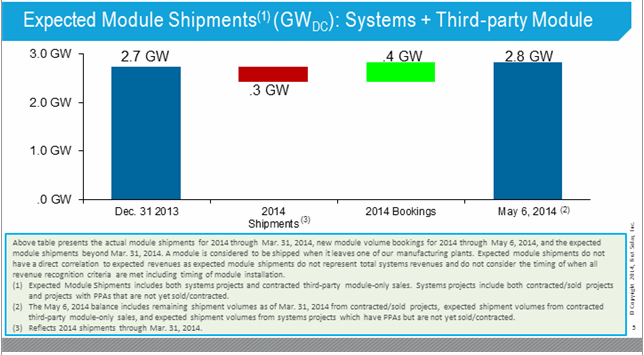 With this in mind, First Solar is putting more emphasis on margin per watt, yet reportedly will no longer publish its cost per watt. This metric is being held closely to the chest as the company continues to compete with lower-cost Chinese solar companies.

Despite an ostensibly favorable quarter and strong outlook for the year ahead, FSLR actually opened lower on Wednesday after a slight bump in after-hours trading. Shares gained nearly three percent after the bell Tuesday, but in early trading on Wednesday, they were down almost two percent.

The fact of the matter is, if a company puts diminished importance on the financial data it releases while simultaneously obfuscating the data it does find important, investors are likely to retreat.

Financial markets are information markets, after all.