Profiting from the Latest Gulf Discovery Without Touching Exxon

At the very least, OPEC never fails to entertain.

Just when the collective oil junkies around the world — with the United States being the top addict — were ready for more oil, the mighty OPEC immediately pulled an about-face. After all, the oil cartel is shipping us roughly four and a half million barrels every single day...

Still, should we have expected any less?

Their game of good cop/bad cop was played out on the world stage.

Playing the good cop role, in typical fashion, was Saudi Arabia, wanting to raise output. We can't really blame them for their position, as the country is far and away OPEC's strongest producer and one of the few countries in the world that can actually pump more crude.

As for the antagonist is this crude decision? Iran and Venezuela have been playing this role for years, perfecting their villainous part to an art form.

The outcome was OPEC's production levels remained at 26.15 million barrels per day, or about 1.3 million bbls/d higher than their quota in 2009. They also agreed to re-examine the situation again in three months.

Despite the decision, the Saudis took it even further this go-around, saying they'll increase production anyway.

Really? At what point are we shocked to find an OPEC member cheating on their production quota?

Not only is this a commonplace occurrence; it's become a running joke.

This is not the first time we've dealt with shady OPEC numbers. Remember when members doubled their reserves within a span of seven years?

And we don't need Nostradamus to figure out what's going to happen in three months. Unless crude prices drastically break through the price ceiling, I have a sneaking suspicion that members (the good cops excluded, of course) will be “comfortable” with crude prices.

Yet, as entertaining as it was to see this drama play out in the media, it wasn't OPEC's game I found myself questioning for most of the week...

Rather, it was the news coming from the Gulf of Mexico, specifically ExxonMobil's latest round of good fortune.

And it was good news — something the Gulf of Mexico hasn't had in a long time.

This week, ExxonMobil announced a trio of discoveries in the deepwater Gulf of Mexico...

Almost 700 million barrels of oil equivalent, to be exact.

The thee discoveries, one natural gas and two oil, were found in Keathley Canyon blocks 919 and 918 – or approximately 250 miles southwest of New Orleans, according to the release.

Although the company only holds a 50% working interest in the joint ventures with Eni Petroleum and Petrobras America, the discoveries come with a huge upside. That is, they are estimated to be 85% weighted toward oil.

Being the company's first deepwater exploration well since the moratorium, we don't want to rain on their parade.

We will, however, gladly jump along for a very profitable ride.

There is something ExxonMobil won't tell you about their latest oil discoveries.

There are simply better investment alternatives out there.

It's not a secret that we hold little love for ExxonMobil, considering it more of an investment trap than anything else. Sure, if we wanted to keep our money locked down and untouched for 50 years, we might consider it. 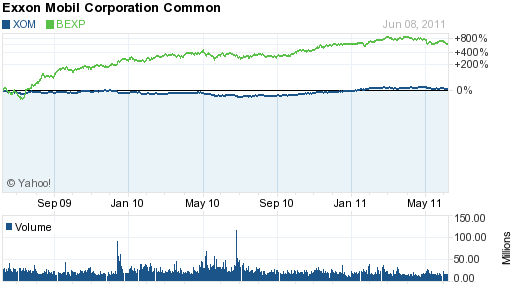 We don't need to touch shares of Exxon in order to benefit from their three discoveries...

The immediate benefactor from ExxonMobil's good luck are the deepwater drillers.

Going forward, we can bet there will be a lot more interest in the Gulf of Mexico. Yes, the three Exxon discoveries certainly won't save the day. More activity, more drilling, and more profits.

And it's not cheap to develop these new discoveries. The cost of drilling a deepwater well can run as high as $100 million. In 2010, the average daily rate for a deepwater drilling rig was approximately $420,000. And if you don't believe that there are added risks to deepwater drilling, just imagine how much BP will have to dish out once all the lawsuits and fines are said and done.

We outlined several of our favorite offshore drillers before. And going forward, we can bet there will be a lot more interest in the Gulf of Mexico.

The $100 million price tag on those deepwater wells isn't cheap. This comes to mind every time someone gripes about spending $3-$5 million per well in the various shale plays across the U.S.

Think about it... These shale plays can drill twenty wells for the price of just one of ExxonMobil's deepwater wells.

It's not just about well costs, either.

My colleague Ian Cooper pointed something out to me earlier when I mentioned ExxonMobil's 700 million boe discoveries. If we take a look at just one of the upcoming shale plays — the Marcellus formation — we can see how Exxon might feel a little sheepish.

With almost 50 trillion cubic feet of recoverable natural gas locked in the Marcellus Shale formation, that translates to approximately 3.6 billion boe. He even outlined one company that's making gains hand over fist for his readers so far, which could easily double or triple their money as the onshore drilling boom continues.

The EIA has reported more than 827 trillion cubic feet of natural gas in U.S. shale formations, or roughly 142 billion boe — 200 times the amount of the ExxonMobil discoveries.

Of course, that's just the natural gas side of the shale plays, which will play a critical role in meeting our future energy demand.

Next Wednesday, I'll tell you why.