EU Debt Crisis and The Outlook for Oil

The Price of Oil Moves Up While Euro Strikes

Peak oil demand and over-paid government workers... the price of oil is moving on growth and the dollar... take a look at a year in the light crude market: 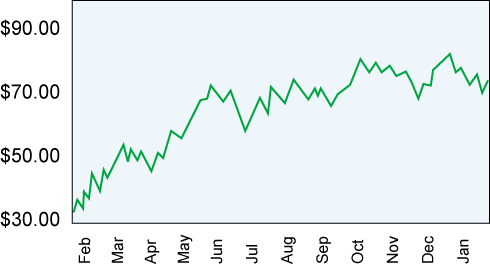 Yesterday, the price of oil jumped a buck as the old world potentates harrumphed their way to bailing Greece out of its debt crisis. It seems that the Mediterranean nation isn't Sparta after all...

In contrary logic, the U.S. dollar rose, pushing up the oil price. One would expect a relief rally in the euro — if the bottom is in for the Greeks, the euro should go up.

But no, currency traders are selling the euro and buying the greenback as they see that the European debt crisis has a long odyssey ahead.

There are other countries in the same dire straits: Ireland, Portugal, Spain, and Latvia, to name a few. The question is whether or not there is the political will to cut costs and balance budgets will exist.

It's not like the Asian contagion of the last decade, in which the IMF hit the tarmac with smug looks and shiny briefcases to impose harsh budgets and sound policies — a system that seems to have worked brilliantly in most cases.

Who now remembers that South Korea threw down a dictator amid street riots and anarchy a mere ten years ago?

Bailouts imposed from afar tend to work because the politicians can point to the IMF — or in Greece's case, to Brussels — and say, "It's them, not me. My hands are tied."

There Must Be Riots

That said, change is never easy. The entitled must riot. As I write this, the Greek government workers are making more money than the country has the ability to pay — and yet are screaming in the streets. They've grounded flights, closed schools, and shut down the cities. In other words, they're acting like my three-year-old when I turn off the TV.

It would seem the bureaucrats don't like the current plan, one that calls for a wage freeze and pay cuts for higher wage-earners in the public sector. And they aren't going to go down easily... Another general strike has been called for February 24.

The bottom will be truly in when it becomes clear that the unions are ineffectual. The worst-case scenario is some half-measure that props up the status quo and lets the system shutter about like a retched zombie, not quite dead and forever jumping out of dark places. (Think Japan of the past twenty years.)

We have the same problem in the United States. California, New York, Maryland, Illinois, and many other states are slaves to the unionized government workers.

There is already a backlash brewing, and for good reason.

Take a look at the handy chart, below. 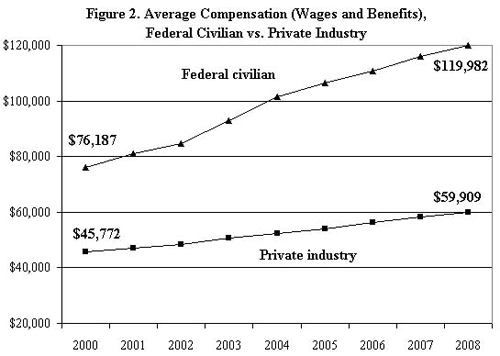 The obvious solution for the current U.S. deficit is to fire 200,000 government workers and cut their pay by 40%. This would be a good first step.

The Balance in Oil

On the supply and demand side, the price of oil has been bouncing between $70 and $80 for about 10 months now. The bears say "recession" while the bulls point to Chindia and say "growth." So far, both have been right.

I am of the opinion that the economy in the U.S. and Europe is out of recession. We have recently received good news on the jobs front, in GDP growth, CEO polls and in manufacturing numbers. The economy will grow and the price of oil will break out to the upside.

Yesterday, the International Energy Agency threw a new spin on the story when they broke news that the demand for oil may have peaked in the developed world: "More efficient cars and the increasing use of electricity and gas instead of oil in areas outside transport, such as heating, have driven the move in the West."

The IEA went on to say that oil demand from developed countries accounted for 53 percent of global output, compared to 54 percent last year.

While it is true that all new U.S. power plants are fueled by natural gas, the recession and slowdown in manufacturing would be a more likely culprit for the drop-off in demand.

Regardless, oil demand in total is rising as China and India pick up the slack. Global oil demand is estimated at 86.5 million barrels a day in 2010 — 1.8% higher than 2009 levels. They new demand is coming entirely from emerging markets.

The upshot is that we will see modest growth in the price of oil as the world economy continues to pull out of its malaise.

Furthermore, continued union strikes in the Eurozone will push the dollar higher over the short term (oil will go higher as a direct result, since it is priced in dollars), as the bailouts move from country to country. A hundred dollars a barrel by the end of the year seems probable.

P.S. Look for government employee strikes in the U.S. in October when the Tea Party movement grows, starts influencing elections, and demanding fiscal accountability... or is that too much to hope for?

P.P.S. My favorite stock in the world is a small oil company by market value ($47 million market cap), but more than 100 million barrels in proven reserves. This company is so undervalued, it will go up even if the price of oil falls. It is up 54% since I recommended it last month — and up 8.4% last night alone. The company will really get Wall Street's attention when it starts production in April... so I suggest you buy it before then.