EOR Market to Quadruple by 2020

The oil and crude industries will have a greater helping hand in the form of enhanced oil recovery (EOR). It is one of the most important elements of pumping more volume and tapping into the deepest nether-regions of sediment.

Higher oil demand means greater interest in the EOR market, which will help the fossil fuel market stay competitive with other energy sources. As with any other market, there are obstacles to overcome, but the EOR market has gained more attention from investors and oil companies. The already $126 billion EOR market is expected to quadruple by 2020.

Since there is an ever-present demand for oil around the world, particularly among developing nations, EOR will contribute more oil to the world market while helping nations rely less on oil imports.

According to RigZone, EOR has mostly been an offshore phenomenon, but many experts say that EOR practices will have just as much impact on land if there is enough investment. The U.S. could boost its 30 percent recovery rate to over 60 percent if the right extraction methods are used.

How does EOR work?

There are three main EOR methods: thermal, chemical, and gas.

Thermal recovery is usually in the form of hot steam that is introduced to the reservoir for thinning the oil. This makes it easier for more oil to sift through pipelines much faster.

The thermal method makes up half of the EOR market, according to RigZone.

This graph shows how steam can render oil with less viscosity, which makes it easier for production pipes to reach. 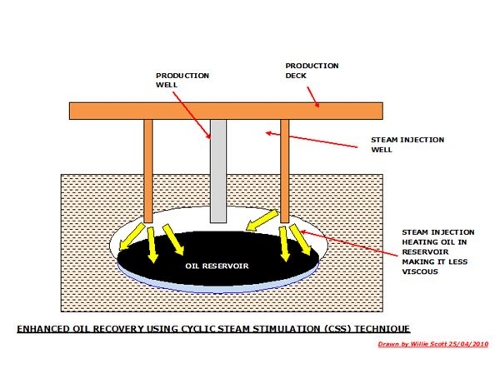 Heat is also one of the cheaper alternatives compared to other EOR methods because it is easy to generate.

Chemical EOR is the least chosen application, but it is used for loosening stubborn oil deposits. It uses chemicals called polymers, used for alleviating surface blockage and enhancing floodwater and/or surfactants.

Surfactants are used to break underground tension, which keeps oil deposits locked in. Using chemicals to reach more oil only makes up less than one percent of EOR methodology in the U.S. oil market, as reported by RigZone.

The illustration below shows how surfactants can push oil banks towards recovery pipes. 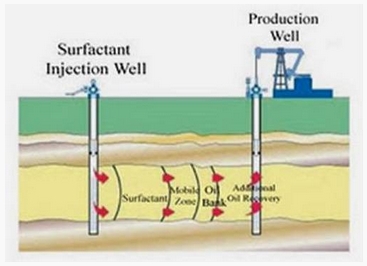 While chemical EOR has been proven to work, the process in manufacturing such chemicals requires time and more investment, and there are other alternatives that will allow explorers to pump more for less money. Pumping chemicals into the ground may also make companies vulnerable to federal or state sanctions.

The next best alternative to thermal recovery is gas injection because it places pressure on a reservoir while thinning the oil in the process. Companies have a variety of gases to choose from: nitrogen, natural gas, or carbon dioxide.

In the U.S. alone, half of EOR methods employ gas extraction, according to RigZone.

This chart shows how gas can push as much oil reserves from underground so it can reach the surface.

The most popular EOR methods are the ones with abundant resources and basic applications. RigZone discussed a cheaper EOR method of injecting a saline solution in water, which is expected to flood out individual wells.

EOR methods may sound simple, but success rates are not always up to par, and companies may have to make more accommodations for the EOR market.

What are the barriers?

According to RigZone, factors that are currently holding back the EOR market from its full potential are “economics of the development; the weight, space and power limitations of retrofitting existing offshore facilities; and fewer wells that are more widely spaced contributing to displacement, sweep and lag time.”

The EOR market looks promising, but it is still in its preliminary stage, and there is no solid plan on how these methods will be applied on a mass scale.

The implementation process can be costly and time-consuming. The Sacramento Bee was right in saying, “EOR projects are among the most complex and difficult undertakings in the upstream oil industry.”

EOR may be growing in popularity, but you can also expect some measure of sanction by the EPA, especially in the realm of chemical EOR. Perhaps chemical EOR worked well on ocean rigs, but the use of chemicals on land could be scrutinized by state and local governments amid concerns of contaminating underground water sources. Fracking is becoming a hot-button issue, and some elements of EOR could be similarly targeted.

Companies would have to tread carefully to avoid legal or legislative entanglements. EOR may be an emerging market, but government initiative of environmental concerns may place some restrictions on the EOR market; however, since chemical EOR is one of the least used methods, such regulation will not affect the market as a whole, and other EOR methods have not had a major impact on the environment.

At the end of the day, EOR is about more oil. EOR is simply a means to an end.

More investment is needed in EOR, not only because of rising demand, but to also quell price hikes at the pump. More oil is needed in order to stifle rising prices worldwide.

EOR also has international reach as more governments and companies are embarking on their own exploration campaigns, and it can be a determinant factor in extracting more shale oil from rocky regions.

Despite the obstacles, the EOR market is gaining traction, and there is more of an effort to invest in these practices.