Last week, I asked you to push aside your emotions when investing.

Legendary investor Warren Buffett learned to do this on his very first trade, and it remains one of the few lessons that many traders simply can’t grasp.

Today, I want you to break this rule.

Toss it, shred it, discard it however you wish… it doesn’t matter.

This time, I don't want you to just let your emotions guide you; I want you to embrace them.

Bring them back for a one-night show, and you’ll make a killing.

It may not seem natural at first.

For me, personally, if the numbers matched up, it didn’t matter if the company sold clothes, energy, or even dog food lids.

As long as the company brass could come through for shareholders, grow earnings, and maintain a disciplined balance sheet, it didn’t matter.

This kind of “check your emotions at the door” investing mentality has helped men like Buffett build vast fortunes from virtually nothing.

Now, we’re going to chuck it aside — just this once.

Let me show you why…

Musk vs. Buffett Round 2: Tesla Attacks

The lithium war is turning vicious.

And if there’s one thing we’ve been able to count on when it comes to billionaires, it's their greed, their thirst for more wealth.

Whether they use their near-limitless fortunes for good or evil, there’s no denying one thing: they want it.

Again, don’t judge them too harshly.

Even the humblest person on the planet has spent some time wondering what they’d do with the combined $101.9 billion that Buffett and Musk hold.

As you know, these two billionaires are in a heated war to control the EV revolution.

And it’s starting to get dirty.

That didn’t sit well with Musk.

He was patient, I’ll give him that much. But while Buffett took the reins and BYD started dominating China’s electric vehicle market, Musk waited… and waited.

And then he struck…

A few days ago, the Wall Street Journal broke the news that Tesla had reached a deal with the Chinese government to build a new facility in Shanghai’s free-trade zone.

Musk himself told us that this production facility could cut the sales price of his EVs in China by one-third.

China, as you know, is on track to completely ban traditional fossil fuel vehicles by 2030.

But they have one serious issue to work out first… one that individual investors like us can take full advantage of and milk this billionaire duo for all their worth.

And all you need to do is let emotions guide your hand...

Break the Rules of Investing

I told you earlier that we’re letting our emotions run point on this one.

Buffett and Tesla have a major hurdle to overcome: finding the materials to produce their future global electric car fleets!

I know you don’t need me to tell you that one of the key components in a lithium-ion battery is — spoiler alert — lithium.

Now, even though the most successful investors on the planet will keep their emotions in check...

In the transportation sector, this meant casting aside the general public sentiment that oil companies are exploiting both the environment and their customers in an attempt to generate every last penny they can.

Public sentiment, however, is changing… and quickly.

Deep down, we can both see the writing on the wall.

Don’t bottle up that emotion; let it lead you into a small sector of stocks that are positioning themselves to fleece billions of dollars from powerhouse investors like Buffett and Musk.

I want to show you three of those stocks right here. 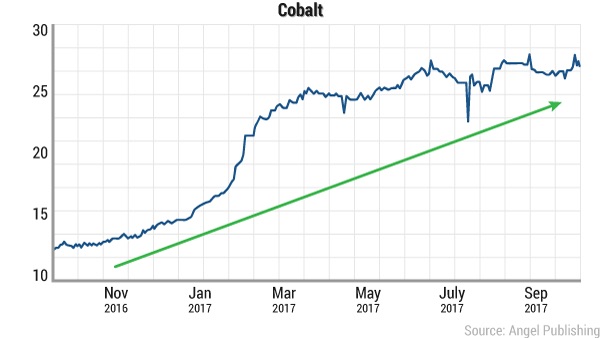