Dow on a Rampage

The truth of the matter is that, though they may have been a bit premature in their timetable, they were absolutely right... The Dow Industrial Index is trading just shy of 20,000. And at some point, five or 50 years from now, it will hit 36,000. The timing has a lot to due with inflation.

Our good friend and Federal Reserve Chairman Janet Yellen came out and said she would boost interest rates to give them some wiggle room in the event of a market crash.

From the Fed speech:

We want to feel that if the economy were to suffer an adverse shock that we have some scope through traditional means of interest rate cuts to be able to respond to that.

The problem is that raising interest rates often creates the crash they are seeking to avoid. On the other hand, leaving them low for too long creates the bubble... followed by the crash.

We've seen this story repeat itself over the past two decades.

Yellen believes she is striking the right balance:

We are not seeing evidence in labor markets of very substantial upward pressures on labor that could signify extreme shortages of labor that could propel inflation higher in a very rapid way, and inflation is still operating below our objective. So I do not judge that we are behind the curve. My judgment is that we are in a good path to reaching our objectives. But of course, the outlook is uncertain.

The problem is that the Fed is always late. They don't see the bubble until it's popped. They don't see inflation until it shows up in their spreadsheets, and by that time, it is too late.

Currently the PPI shows inflation at a very low 1.6% for 2016. But we all know that the price of oil and gasoline will start to move up on the OPEC deal. The price of medical, tuition, housing, automobiles, and stock prices are also quite high and accelerating.

The Fed is notorious for “not seeing” bubbles. Greenspan even said bubbles were “unknowable.”

Everyone I talked to in 2006 — from my barber to the guy scraping boats at the marina — knew that the housing market was a bubble. But the Fed, they had no idea.

Up is Down; Black is White

The problem, of course, is that higher interest rates mean a higher dollar, which limits exports. It also means that the money the government pays on its debts goes up.

Source: Mishtalk.com via the Federal Government

It's like having a flexible rate mortgage. Every quarter, your mortgage payment goes up until you are priced out of your house.

U.S. debt increased by $1.2 trillion last year. If Trump spends on defense and infrastructure, it will go up more next year.

We are already $20 trillion in debt as a country. And by the time it’s over and the next bubble pops, the hole we'll have to dig out of will be immense. If Trump does what he proclaims he wants to do — a trillion on infrastructure, a rebuilt Navy, and some form of trade war — the debt will likely be $30 trillion in four years. People forget that Reagan tripled the deficit.

Alas, human nature is what it is... An untenable situation will not end until it has to.

It is the hubris of man that we must push our ideas to the bitter end.

The Venezuela Stock Market did very well this year. 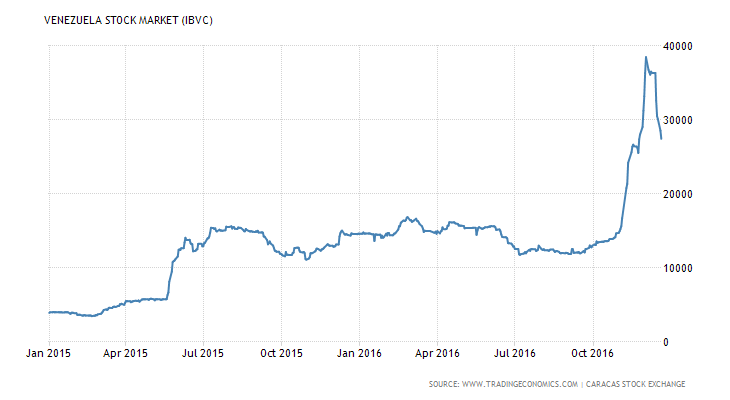 Just not in dollar terms, as their currency collapsed.

As I write this, the greenback is at a 14-year high. All sectors of the U.S. market are overbought, with the exception of gold and silver. It might not be the absolute bottom in metals, nor the absolute top in the dollar, but it is getting close enough to accumulate.

Here is the 10-year chart on the Silver ETF (SLV). 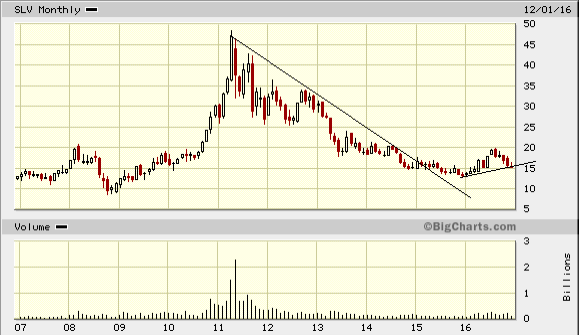 The downtrend is broken. We get the first dead-cat bounce. Then, if the pattern holds, we will see it walk higher. There is plenty of support here going back to 2007. Sure, SLV could fall another 10% before the final bottom... But the downside is limited, while the upside is large.