A new shale formation in the U.S. is bigger than the Bakken... bigger than California... even bigger than every oilfield in Texas. 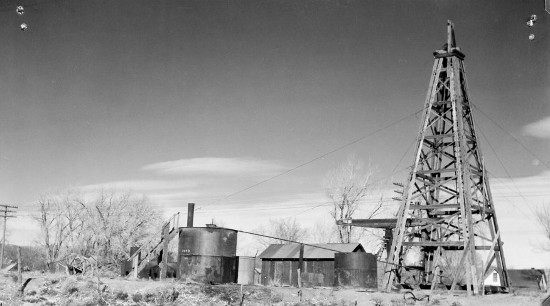 In September 1860, a prospector named Gabriel Bowen was on a hunting/trapping expedition when he encountered the strong odor of petroleum.

He followed the scent until he stumbled on a spring, where he later told the local newspaper, “Oil flowed at a rate of 5 gallons per hour.”

Bowen quickly staked a claim on the location, and the site became known as “Oil Spring” because of its numerous naturally occurring oil seeps that stretched for miles.

The field would later become legendary in America, supplying a large part of the U.S. with oil for decades.

Mind you, the discovery wasn’t in the oil-rich states of California, Texas, or even in Pennsylvania, where America’s first-ever oil well was drilled in Titusville just a year prior.

No, this oilfield was discovered in the northeastern part of Colorado, where the Ute Indians had been using oil from the seeps for centuries to make medicine and seal baskets.

The oilfield was named Florence. And truth be told, it’s the second oldest field in the U.S., making it one of the oldest in the entire world.

And at its height in 1892, it was America's most prolific oilfield, producing in excess of 3,000 barrels per day.

But check this out: Florence is still producing to this day. In fact, it has helped Colorado’s oil production reach a 51-year high.

And it shows no signs of slowing down.

So how can a 154-year-old oilfield still be producing?

I’m dead serious. The oil region I’m about to tell you about is bigger than the Bakken, the Eagle Ford, the Permian, and even Saudi Arabia’s Ghawar... combined.

That's why the $10 billion global research and consulting firm IHS recently called the field the “King Kong” of the oil industry. Late last year, Whiting Petroleum — one of the basin’s largest operators — told the Denver Post, “There’s a tremendous amount of oil in place.” And Noble Energy, another operator in the basin, said, “We are still finding out how big this is going to be.”

But ABC News summed it up best when it reported, “Drillers in Colorado are poking into a massive shale deposit... to unlock oil reserves that are so vast they would swamp OPEC.”

Read that last part again... we're talking about an oil play bigger than all of OPEC. And it's right here in the good ole US of A.

I’m not exaggerating when I tell you it’s the mother of all shale plays. That’s why I’ve dubbed it “Super Shale.”

And it’s the sole reason the U.S. is about to become an oil and gas empire, bar none.

Have you ever wondered why the United States has found itself in the early stages of an oil and gas renaissance even after its conventional oil production peaked in the early 1970s?

To get the answer, we have to go back over a hundred million years to the Cretaceous Period.

North America was split in half by a massive inland sea known as the Western Interior Seaway (WIS). The WIS stretched over 2,000 miles from the Arctic to the Gulf of Mexico. 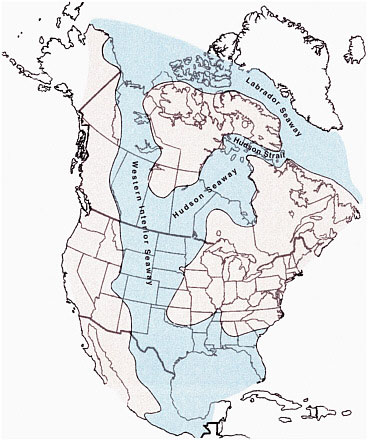 During this period, North America was much warmer than at present and much closer to the equator. For millions of years, the warm waters of WIS allowed for thriving and abundant alga, plant, and animal life.

Naturally, all this organic matter settled at the bottom of the seafloor as deposits. Over the course of millions of years, the deposits continued to grow, layer after layer.

And as the weight of the deposits grew, the Earth's crust depressed, so that while the depth of the sea changed but little, the deposits grew in thickness to as much as 12,000 feet. That's more than two miles deep of organic matter.

Gradually, the level of the continent rose, and the sea filled in. With the pressure from the weight of the land above and the heat of the Earth, chemical changes took place in that two-mile deep organic material, and it slowly became petroleum.

As this happened, the pressure of the rocks above caused the petroleum and water to migrate through the permeable rocks, sometimes for great distances. The petroleum would tend to float on top of the water and continue to migrate until it would come to a layer of impermeable rock, such as shale.

And that's why the United States finds itself staring at an oil bonanza.

And the old Florence oilfield is dead center in this Super Shale.

Why is this important?

Well, look at all the oil basins that exist within the Western Interior Seaway. And when I say basins, I’m not even factoring in the vast oil sands in Alberta and the prolific Gulf of Mexico, both of which exist inside the WIS. 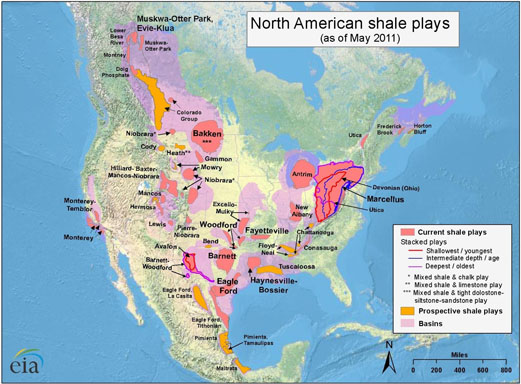 All in all, there are over 30 major shale basins within the Super Shale. In fact, you'll recognize more than a few of the bigger ones right away, such as the Bakken, the Eagle Ford, the multi-stacked pay zone of the Permian Basin, the Barnett, and even the Bakken-like potential of the Duvernay in Alberta.

And with the ingenuity of pairing horizontal drilling with hydraulic fracturing technology, drillers are finding new oil formations stacked on top of previously discovered ones. There could be hundreds!

By my estimation, the Super Shale holds some 6.268 trillion barrels of oil. And that may turn out to be a lowball number. Who knows?

I do know this: The oil and gas revolution is just getting started. The U.S. will be in the driver’s seat for energy for decades to come — mark my words.

And of course, I’ve found a single investment to take advantage of the entire Super Shale.