Last night, the tech sell-off continued. The FAANG stocks (Facebook, Apple, Amazon, Netflix, and Google) all dropped over 3.5%. Apple had its worst drop in over a year, falling $17 by premarket this morning.  Apple, Amazon, and Facebook have all been downgraded over the weekend.

The tech wreck continued overseas. Europe’s big chipmakers STMicro and Dialog took a hit, as did Samsung in Korea.

The U.S. dollar sold off a bit on the news, while crude oil and gold rose. The market teeter-totter of fiat currencies versus things you can drop on your foot worked yet again.

This market has a whiff of the 1998–99 market to it, with Amazon the only name back for the second great tech bubble.

This is the three-year Amazon chart, where each candlestick represents one week. 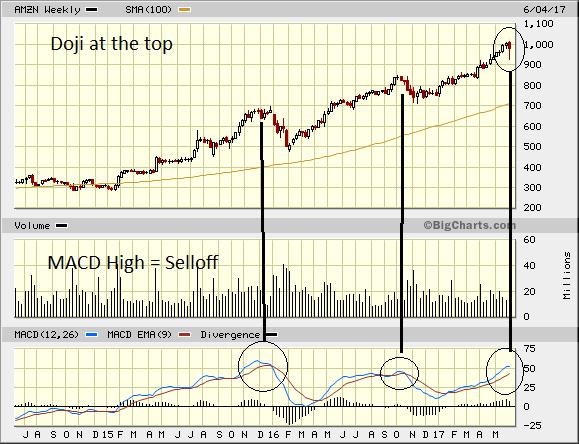 The moving average convergence/divergence indicator is at the bottom with the red and blue lines. It is a visual representation of overbought/oversold. As you can see, each time over the past three years when it hit over 40, AMZN sold off over 10%.

That yellow line is the 100-day moving average, which is a support point.  This chart is saying to expect a sell-off to $710 over the summer.

Over the weekend, while my wife and I ate a paleo meal of eggs, bacon, and spinach on the garden patio, she pointed out an interesting interview.

It was a blue-sky day after a very wet spring, and the roses were fragrant and buzzing with those heavy, random bees.

You may remember Henry Blodget as one of the scapegoats of the 1999 bubble. At the time, he was head of Global Internet Research at Merrill Lynch. In October 1998, he put out a note saying that Yahoo! would go to $400 a share from $240 within a year.

Many people laughed, but it hit that mark three weeks later — a 128% gain that put Blodget on the map.

After the 2000 dot-com crash, New York State Attorney General Eliot Spitzer was looking to make a name for himself. He published internal emails showing Blodget telling his colleagues that Yahoo! was a “POS” and internet stocks were “dogs.”

The upshot was Blodget was fined $4 million by the SEC and got a permanent ban from the securities industry. At the time, Merrill was paying him a salary of $12 million a year.

Blodget went on to found Business Insider, which was a great success. He sold it for $343 million in 2015.

Eliot Spitzer, meanwhile, rode his reputation as a hard-nose AG to become the governor of New York in 2007. He held this position for about a year.

Spitzer was taken down in 2008 by a honey pot in the shapely form of a $5,000-an-hour call girl named Ashley Alexandra Dupre. 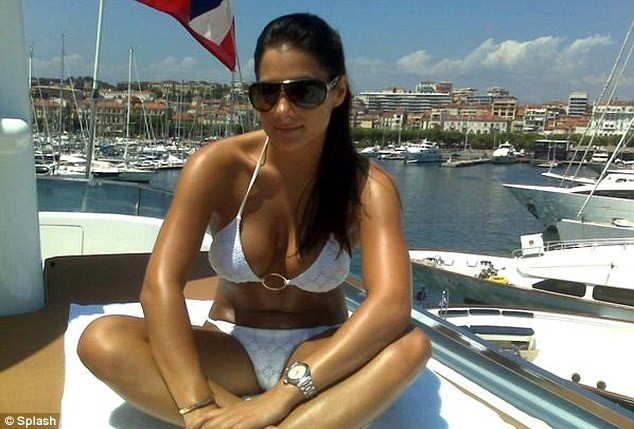 This is yet another lesson in which the political class loses out to the financial.

So, anywho, here’s Blodget interviewing Jim Rogers, who got rich riding George Soros’s coattails — which is another story altogether — and he is tossing out softball questions:

Rogers: I learned very early in my investing careers: I better not invest in what I want. I better invest in what’s happening in the world. Otherwise I’ll be broke — dead broke. Well, what’s going to happen is it’s going to continue. Some stocks in America are turning into a bubble. The bubble’s gonna come. Then it’s going to collapse, and you should be very worried. But, Henry, this is good for you. Because someone has to report it. So you have job security. You’re a lucky soul.

Blodget: And how big a crash could we be looking at?

Rogers: It’s going to be the worst in your lifetime.

Blodget: I’ve had some pretty big ones in my lifetime.

Rogers is correct, of course. We are heading for a doozy. We’ve had three bubbles in the last 20 years. After each collapse, the Fed cut rates. But with rates now low, there is not much room to cut. Furthermore, in the past, countries like Japan, South Korea, and China were big savers with little debt. They could afford to buy U.S. Treasuries and prop up the market.

The Fed is desperately trying to hike rates before the next disaster to give itself wiggle room. It will hike another quarter point this month.

The question is, at what point in the bubble are we? I expect we are a year and a half from the top, which would be next October.

If we come out of this summer with some upward momentum, look for some hotshot you’ve never heard of giving some crazy prediction for FAANG stocks (a la Blodget circa 1998). If Facebook hits $350, you know it's time to sell.