It's More a Plateau

For decades people have feared running out of oil. As prices for oil rise, and the demand grows every year, that fear increases. Yergin says this is “the fifth time in modern history that we’ve seen widespread fear that the world was running out of oil.”

In the 1880s majority of oil production was in Pennsylvania and it was thought that no oil would be found west of the Mississippi. After both world wars fear of running out of oil was present again. The 1970s sparked rumor of no more oil, but come 1978 oil production increased 30 percent.

Yergin says people should view oil production’s future in a different way - as a plateau. “In this view, the world has decades of further growth in production before flattening out into a plateau - perhaps sometime around midcentury - at which time a more gradual decline will begin. And that decline may well come not from a scarcity of resources but from greater efficiency, which will slacken global demand.”

And what about those who argue that the world has already utilized half of its oil resources? Yergin quotes geologist Colin Campbell who says, "It's quite a simple theory and one that any beer-drinker understands. The glass starts full and ends empty, and the faster you drink it, the quicker it's gone."

In other words the quicker we use our oil the faster it goes away, it’s common sense really. Luckily, new technologies are being created to give us alternate sources of energy and fuel and make the oil we have to use last us longer. So if we can slow down and decrease our oil use the longer it will take for the peak to be reached.

Yergin says “Just in the years 2007 to 2009, for every barrel of oil produced in the world, 1.6 barrels of new reserves were added. And other developments—from more efficient cars and advances in batteries, to shale gas and wind power - have provided reasons for greater confidence in our energy resiliency. Yet the fear of peak oil maintains its powerful grip.” 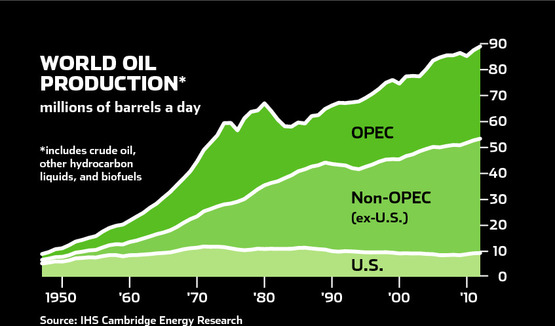 Even with developments in energy efficiency getting better every day, the fear of peak oil still is in the back of most people’s minds.

Yergin attributes his ideas for this article to the late geologist and controversial earth scientist, Marion King Hubbert, whose name is linked to the phrase “Hubbert’s Peak.”

In the late 1940s Hubbert heard another geologist say that 500 years of oil supply remained in the ground; Hubbert did not think this was true. So he began to do his own research and in 1956 theorized that U.S. oil production would reach its peak between 1965 and 1970. This is the Hubbert’s Peak theory.

Hubbert gained his fame when U.S. oil production hit a high point in 1970 and thereafter began to decline. His predictions, at this time, appear to be correct.

Hubbert did not hold out much hope for the future of U.S. oil production and in 1978 said that the children born 1965 and later would see the world’s oil supply be used up in their lifetimes.

Yergin acknowledges that Hubbert may have correctly performed his statistical approach and even predicted dates right, however, he was not correct about the amount of supply in the U.S.

New technologies contribute to finding new resources. “Ghana is on its way to significant oil production, and just a few days ago, a major new discovery was announced off the coast of French Guiana, north of Brazil,” writes Yergin.

It’s argued that the discovery of new resources is declining, but Yergin points out that much of the world’s oil supply is a result of additions and extensions of already existing fields.

It is estimated that the world’s production of oil per day from 2010 to 2030 will increase about 20 percent. U.S. oil production has already increased over 10 percent since 2008.

Yergin concludes his article with a statement that should bring some peace of mind.

“Things don't stand still in the energy industry. With the passage of time, unconventional sources of oil, in all their variety, become a familiar part of the world's petroleum supply. They help to explain why the plateau continues to recede into the horizon - and why, on a global view, Hubbert's Peak is still not in sight.”

We welcome all sides to this debate.