The Tiny Tech Stock That Will Bankrupt Comcast

A few years ago, I saw one company make the biggest mistake of its corporate life.

I'm confident you've heard of Blockbuster before, and its mistake was not buying the 49% stake in Netflix (NASDAQ: NFLX) that the then tiny, unheard-of company had offered.

Of course, Blockbuster is now dead, its ticket stub-shaped signs plastered over to make way for new stores, while Netflix has grown its customer base to a sizable 65.6 million members and offers even more movies and shows on demand — it's already started producing its own content.

Back then, I knew bankruptcy for Blockbuster had become inevitable. Now, the burgeoning streaming market that Netflix has capitalized on over the last few years is threatening to kill off another faltering business: cable television.

One of my colleagues recently explained to me that we're looking at a very similar situation to the one I saw plaguing Blockbuster years ago.

And it all comes down to a cord-cutting coup that's taking place as you read this...

Cable TV — or pay-TV services — is becoming much more expensive... and consumers are sitting up and taking notice.

And now more than ever, pay-TV companies are losing ground on the American entertainment front.

You see, while pay-TV subscriptions have stayed high, actual viewing has dropped precipitously; networks and TV shows have seen their ratings plummet as customers opt to stream content rather than watch through their cable connection.

Look, we both know that it all comes down to just two things: convenience and availability.

Streaming services offer more of both.

Companies like Comcast (NASDAQ: CMCSA) and Time Warner Cable (NYSE: TWC) may boast about continued subscription statistics, but they neglect to remind you that they are also plagued by higher prices and lower public support.

Here's how shares of Comcast have performed compared to Netflix, one of the leaders in streaming: 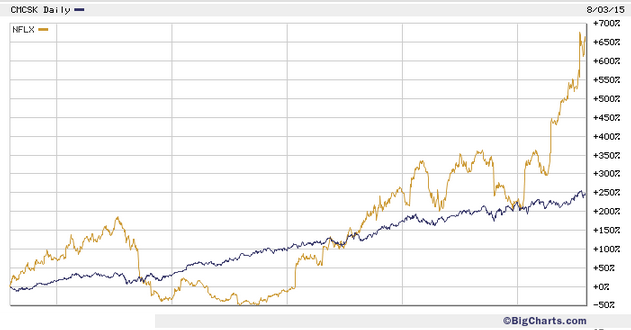 Now, there was a time when Comcast was more worthwhile to investors than Netflix, but the streaming service's 530% gain in the last five years trumps the cable provider's 235% gain by a wide margin.

In fact, more and more people are switching from pay-TV as their primary source of entertainment to streaming services, becoming “cord-cutters.” Millennials especially, those between the ages of 18 and 34, are either getting rid of their cable or never getting it in the first place.

There are young people today that have never dealt with cable TV channels.

These “cord-nevers” are a look into the future of a cable-less world.

So then why is cable still around?

There are a few big things keeping cable companies afloat.

The biggest boon, of course, is a massive television genre that streaming companies simply haven't gained a foothold in yet: sports.

Don't get me wrong; plenty of sports streaming services exist already. However, most don't offer live coverage of current games, and some even black out local games so that local cable services retain their viewers.

And cable companies are quickly losing ground on this front...

Think about this: Nearly 3 million people watched the last Super Bowl on their laptop, tablet, or other device.

ESPN, the biggest player in this game of games, is about to start offering live content over the Internet through Dish Network's Sling TV, which will negate a lot of this problem.

There's another slight obstacle to consider. Remember that cable companies can offer packages that come bundled with Internet and phone services. To stream, you need Internet, so it's more convenient to bundle your Internet together with your cable than to negotiate Internet bandwidth prices.

But as I mentioned above, even those who subscribe to the pay-TV part of the service aren't using it as much, thus lowering network ratings, which makes cable prices rise to make up for it.

Not only is it an unsustainable model — it's already on its way out of the door.

Comcast even announced recently that it would soon offer a streaming TV service.

If one of the biggest, most despised names in cable is looking into Internet-based services, I'd be hard-pressed to find a better sign for cord-cutters.

There is a huge rub in all this... but one that Chris' little $3 tech stock has solved.

Bring on the Bandwidth

Take a look at this U.S. Census Bureau chart showing the country's Internet sources in 2013: 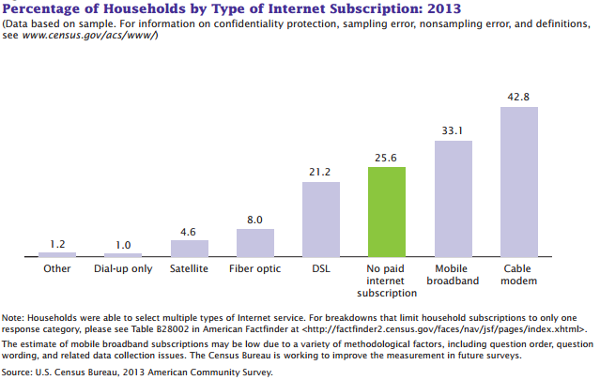 The chart itself mentions that the percentage of mobile broadband sources shown may be underestimated. This chart, however, is about two years old; you can bet that gap has narrowed even further today!

And if you'll remember from the stock chart I showed you above, late 2013 was when Netflix's shares rocketed past Comcast's.

In other words, the switch toward broadband Internet is well on its way.

My colleague Chris DeHaemer and his readers have caught onto this transition and zeroed in on a tiny tech company that's already gained a foothold in this developing situation by offering an array of delivery network services and is even taken part in streaming major live sports events — effectively cutting Comcast's last safety nets!

Moreover, not only is the company running on a private network, but it's already providing services to one of the big streaming names, earning 6.9% of its 2014 revenue there.

Now, this is also not to mention the fact that unlike Comcast and Time Warner, it has a great relationship with its customers.

And we both know that popular opinion can make or break a company — just take a look at Blockbuster if you don't believe me.

If you haven't already, I suggest you take just a few minutes to let Chris show you the details behind this tiny tech company and why it's poised to make shareholders eight times their money from the death of cable.