$25 Trillion CAPEX May Be Required to Avoid a Water Apocalypse

My colleague Keith Kohl wrote to you yesterday about the world's ongoing water crisis. And I wanted to piggyback on that article today.

That's because not only I do also believe that the water crisis is shaping up to be a truly massive investment opportunity, but it has also turned into a disgusting disaster that simply no human being should have to endure.

Here's what a glass of drinking water looks like to one-fifth of the world's population... 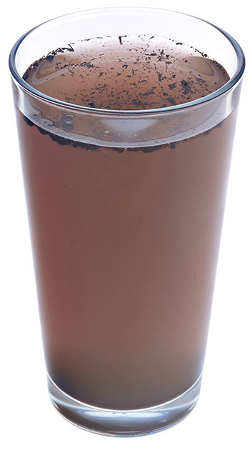 Scientists calculate that the total mass of the world's water is 1.4 quintillion metric tonnes. But less than 1% of that is suitable for drinking.

And with the global population continuing to expand at an unprecedented rate, that small cache of clean water is rapidly drying up.

Global water supplies are already inadequate to meet demand. If present consumption rates continue, the World Economic Forum estimates there will be a 40% global shortfall of water supply in just 15 years.

To address the problem, governments all around the world will need to spend trillions on water infrastructure projects.

Yesterday, Keith mentioned California's $1 billion plan to upgrade the state's water infrastructure amid the worst drought in a generation. But that's just the beginning of it.

Studies show that the United States will need to invest over $250 billion over the next five years just to prevent the deterioration of our current water infrastructure, which is rapidly nearing the end of its useful life.

Globally, some estimates show that water infrastructure projects will need up to $25 trillion of investment. 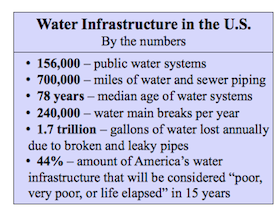 There is simply NO alternative to water.

Every other commodity we use has a potential alternative.

But nothing happens without water.

There are roughly 400 water-related companies around the world, many of them publicly traded. And most appear to be set for profit as clean water becomes scarcer.

As Keith mentioned yesterday, stay tuned to Energy and Capital for much more on water investments. We plan to bring you several different water investing ideas and angles over the next several weeks.