As world commodities markets slumped to six-year lows last week and into the weekend, he said, “Iran endorses an emergency OPEC meeting and would not disagree with it.”

Algeria, another OPEC member, also called for an emergency meeting earlier this month in order to boost prices after a year of shrinking profits for world oil producers.

China is the world's biggest importer of fossil fuels, and with its economy slowing down, lower demand has crushed oil prices, copper prices, and other industrial exports.

An emergency OPEC meeting could boost prices if the member countries decide to curb output, which is near record highs.

If you'll remember, it was last fall that OPEC member and pseudo-leader Saudi Arabia decided to cut prices to China and boost its output in a move to protect market share after U.S. shale oil sent ripples through the world's oil market.

What's more, many OPEC members feel that a meeting and a production cut won't take place without the approval of the Saudis.

While I'm sure the Saudis would like to make more money off of oil production through higher prices, the Kingdom would also be reluctant to give up market share, as it's said many times over the last year.

And even though Saudi Arabia and Iran are OPEC members, the two countries don't exactly get along. A Saudi go-ahead on an emergency meeting at the behest of Iran seems highly unlikely.

Especially when you take into consideration Zanganeh's other comments on Sunday: “We will be raising our oil production at any cost and we have no other alternative.”

So as Iran readies to flood the world with more oil and with no sign of an OPEC production cut in sight, I'd like to welcome you back to 2009.

A common theme I noticed as I read through this morning's financial news was that a majority of companies, especially commodities firms, were down to six-year lows.

Ergo, we are back to 2009 prices for oil, copper, gas, and pretty much anything else that China uses.

As China erases all of its gains in market share since the beginning of the year, oil prices have returned to 2009 lows for both Brent and WTI... 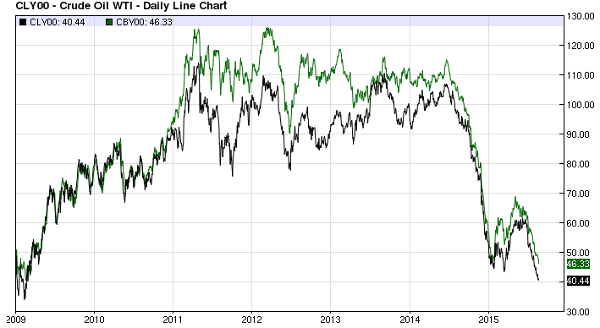 As you can see, WTI and Brent cash prices per barrel show no signs of improvement today. Tomorrow? Maybe, but it's impossible to know.

If the market is depending on China and OPEC to change their respective tunes, there's no telling how long the damage to oil prices could last.

So once again, we're back to 2009 for most commodities and, perhaps soon, stock markets around the world.

Many stories you'll read, like the ones I read this morning, will trumpet the doom and gloom of low commodities and even worse share prices for energy investors.

However, if we're back in 2009, I'd say we're about to see a period of bullishness that I'm sure you wish you had gotten in on six years ago.

In fact, the reason I'm excited about the drop in shares worldwide is that a correction is an amazing opportunity. With shares close to correction territory — a 10% drop off of 52-week highs — the time to buy is here.

Here's Why You Should be Ready to Buy

It may seem outrageous to want to buy shares of anything right now while markets tumble all over the world, but the truth is that corrections only happen every so often. When they do, there's money to be had for investors that can measure value.

Take a look at these charts... 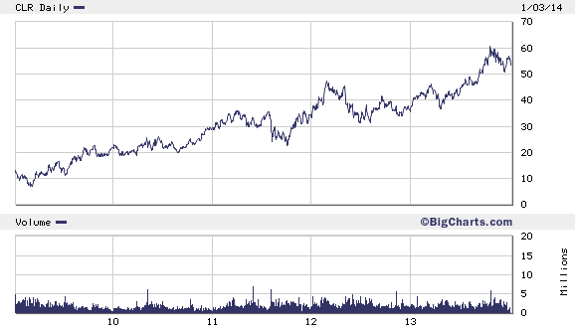 This chart shows Continental Resources (NYSE: CLR), the U.S. shale darling of the last decade. This company went from $10 per share back in 2009 to over $50 per share in early 2014.

Yes, oil was at $100 per barrel in early 2014, but a correction hurts prices, and a recovery provides gains along the way. It just takes time.

Right now, Continental is at $28 per share and could fall further over the next few weeks. Still, it's worth buying if it goes back up to $60. 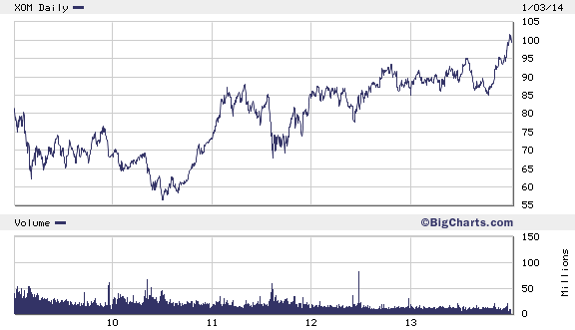 Above is the chart for Exxon between 2009 and 2014, and it shows that even major oil firms can see decent growth when oil hits lows like this. Remember, oil right now is at the same price it was before shares of Exxon and Continental surged to the highs of 2014.

As another example, take a look at BHP Billiton (NYSE: BHP). 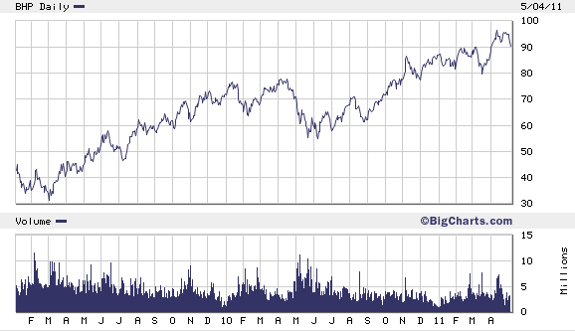 The company — with commodity reserves of all types including coal, iron, copper, and petroleum — more than doubled between 2009 and 2011.

Now, I can't guarantee that commodities will return, but the chances of them staying so low for a prolonged period is highly unlikely. When demand rebounds and supply returns to normal levels, investors who didn't get in now will be kicking themselves.

If you're an investor who wants to make money, it only makes sense for you to buy the correction dips and bear market lows. If you do, especially oil, gas, and copper, you'll find that in a few years, you'll have grown your money substantially.