Beijing is choking on its own progress. 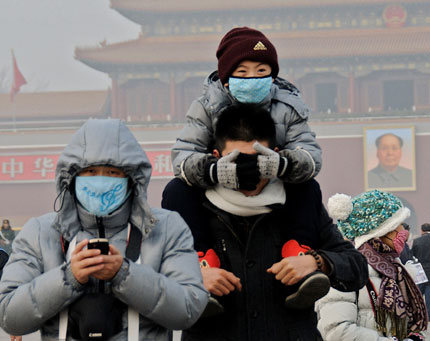 If you didn't hear about it last week, reports out of Beijing showed the city of 20 million had been hit with some of the worst air pollution ever recorded. We're talking about as bad as some of the toxic soup that used to blanket the streets of London during the early days of the industrial revolution.

Of course, China is experiencing its own industrial revolution today, and as a result, it's also at risk of condemning itself to repeat some of the same environmental problems of the past.

This, along with the fact that the Middle Kingdom is desperate for the power generation it'll take to keep its economic machine running, is why the Chinese aren't debating the need for a well-diversified power portfolio.

Although China is the largest consumer of coal on the planet, the government has poured billions of dollars into developing its solar, wind, and nuclear resources as well. By 2020, China is expected to have 150 gigawatts of wind energy installed. That's the equivalent of 13 Three Gorges dams.

And its all expected to be developed in less than 20 years.

But here's the most interesting part of China's nuclear expansion: The whole thing is going to be facilitated by what the World Nuclear Association calls the world's most advanced reactors ever created.

Although it didn't get much attention, a report was released a few weeks ago by a Labour member of the House of Lords in London. Bryony Worthington, the Labour's climate change spokeswoman, announced China is moving to thorium as a nuclear fuel.

Word is, after a trip to China, Worthington discovered that the son of former leader Jiang Zemin was charged with developing thorium power. He currently has 140 scientists on staff, and is expected to hire an additional 600 this year.

Now last year, China's Academy of Sciences announced it was building a thorium reactor. But it looks like the higher ups are looking to expedite this project. In fact, Zemin's son recently landed a cool $350 million in additional funding for his program.

Bottom line: If China's looking to land 200 gigawatts of nuclear, it's going to do so using the most advanced technology it can get its hands on. And when it comes to safety and efficiency, thorium is a serious contender.

Of course, China's not the only game in town when it comes to thorium...

India has been working on thorium for years.

As a continued lack of coal resources inhibits its growth, India is seeking to expand its nuclear fleets. And interestingly enough, the Asian nation boasts the second-largest thorium resources in the world, thereby making thorium an excellent solution to imported uranium reliance.

Norway has major thorium deposits as well, and has been working closely with Westinghouse to develop thorium reactors. And not surprisingly, after Fukushima, Japan is now actively studying thorium alternatives, too...

Truth is, while thorium has been an afterthought for decades, it's finally starting to get some serious attention.

According to thorium advocates, thorium reacts much more efficiently than uranium. As well, thorium produces waste that has a shorter lifespan, and its melting point is much higher, which theoretically makes it “meltdown proof.”

But then again, there are also those who say thorium's advantages are overstated...

The Union of Concerned Scientists states thorium can be used in conventional light-water reactors, but cannot sustain a nuclear chain reaction by itself, and must be combined with a fissile material such as enriched uranium, uranium-233 (an isotope created from thorium), or plutonium.

Meanwhile, the DOE has said reactors fueled with thorium and uranium do not provide any clear advantages over uranium-only reactors in terms of waste management, proliferation risk, safety, economics, or sustainability. In fact, a liquid fluoride thorium reactor that operated at Oak Ridge National Laboratory back in the 1960s still has highly-radioactive spent fuel on site that is proving very costly and difficult to clean up.

Of course, it's not the 1960s anymore, and technology has come a long way. That being said, I'm also not a nuclear engineer, and I have no interest in turning this into a debate about nuclear physics...

All I'm interested in is finding an opportunity to profit from what looks like the eventual development of thorium. And right now, it's still very limited — and quite risky.

So instead of getting hung up on thorium investments this year, I'm going to continue profiting from the growth of domestic oil & gas and infrastructure. This is where I made most of my money last year, and it's where I'll continue to profit in 2013...