Securing Energy Supplies at Any Cost

You might not be fully aware of China's intentions behind their latest Arctic oil deal with Russia.

On the surface, this story looks like another example of the burgeoning friendship between the two countries.

However, the real story came to light during Chinese President Xi Jinping's trip to Moscow to promote increased cooperation with Russia...

Along with a slew of economic deals, such as significantly hiking trade volumes, Russia agreed to increase future oil and natural gas exports. As it stands now, Russia ships about 15 million tons of oil every year to China, a number that is expected to grow to 31 million tons per year within the next three decades.

But China is after more than simply boosting trade deals and making new friends.

The Chinese are shaking hands with Russians as a means to implement the next step of their long-term energy plan — a strategy that has grown abundantly clearer over the last several years.

In the years since Russia planted its flag on the Arctic seabed in 2007, the world has been waiting for Putin to bring in outside help to produce the oil there.

That's normally a job for the supermajors like ExxonMobil and friends — but China's getting a piece of the action this time around. Russia has agreed to let China National Petroleum Corp. (CNPC) join Russia's OAO Rosneft in exploring Arctic waters for oil.

So not only are the Chinese doubling the amount of their future oil imports from Russia, but they're also getting a stake in the Arctic drilling that's about to take place.

In addition to CNPC drilling in three Arctic locations, China Development Bank Corp. will lend Rosneft approximately $2 billion. Of course, China's loan with Russia is backed by future oil production, a detail many tend to overlook.

China has been making deals like these for years.

They poured billions of dollars into Venezuela's oil industry in exchange for guaranteed supply in the future. Soon after that deal, Chavez said oil exports to China would reach as high as one million barrels per day.

And this deal goes a little deeper than merely promising to increase oil exports to China...

We can go back even further, too: In 2009 China shelled out $10 billion to Brazil's state-run oil company, Petrobras. The deal further stipulated that Petrobras would send Sinopec up to 200,000 barrels of oil per day during the next decade.

What's behind the Chinese scrambling to secure future oil supplies?

It all comes down to fear.

Here in the United States, we keep hearing energy independence is right around the corner. Usually, it's tied to the "Drill, baby, drill" slogan or Obama's "All-of-the-above" energy strategy.

Fortunately, we don't have to account for much growth over our current consumption rates.

But that's not the case for China and other developing countries which, according to the EIA, make up nearly all of global energy to 2035... 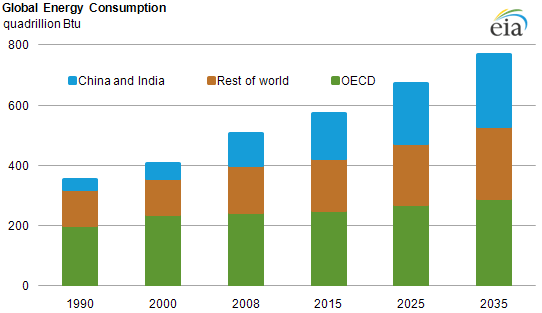 China isn't deluding themselves over how tight oil supplies will become over the next few decades.

What's more, the Chinese are smart enough to not put all their eggs in one basket. Within a decade, China will be Russia's largest buyer of oil; they're already buying more Saudi oil than anyone else.

Still, no matter how realistic China is when it comes to securing future energy supplies abroad, their own unconventional resources are staring them right in the face...

Despite having an extraordinary amount of shale gas underground, right now it's unlikely this resource will play a major role in China's energy production. 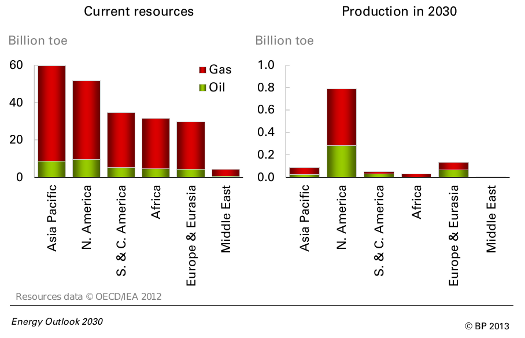 The problem for China comes down to technology.

We're much further along in this department, especially when it comes to drilling and extracting our own shale resources.

This essentially means China will to have to buy their shale boom.

And that's precisely what they're doing...

Cash isn't much of a problem when you have the Chinese government behind you. CNPC recently said it may invest as much as $40 billion for access to U.S. shale plays. And just last month, Sinopec spent $1 billion for a 50% stake in Chesapeake's Mississippi Lime operations.

They're after our experience, plain and simple — and they're willing to pay top dollar for it.