In case you missed it, this Tuesday, North Korea fired a ballistic missile over mainland Japan. If you did miss it, I don’t blame you. I blame Melania Trump...

If you’re one of the millions of Americans who relies on social media for your news, your newsfeed was likely covered with articles and posts about her shoe selection for the Trumps’ visit to Texas.

I mean, what’s more important: North Korea firing an ICBM or the shoes the FLOTUS wore to board Air Force One? Obviously, the shoes. I mean, not only did most of the major news organizations cover the event, but they’re still talking about it. 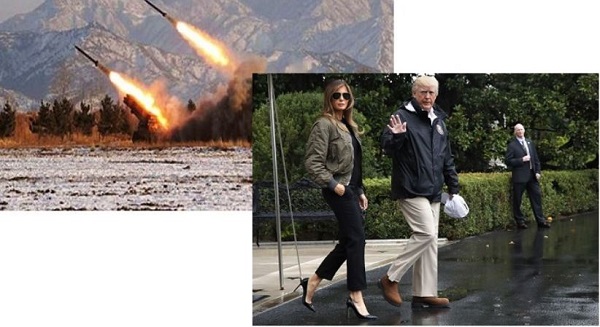 It’s ridiculous, if you ask me. I know there are a lot of people out there who absolutely loathe the president. But really? There’s actual news going on. There’s a natural disaster within our own borders. A rogue nuclear state just fired a missile over one of our closest allies. There are floods in India taking thousands of lives. But we’re worried about what kind of shoes Mrs. Trump was wearing.

OK. I needed to get that off my chest. The rant is over. So, now let’s get into the real article...

Back to my original point: North Korea keeps pushing its nuclear agenda in the face of every opponent of it. That’s not just the U.S. That’s all our close allies, obviously, but also China — North Korea’s closest trade partner and pretty much only friend on the international scene.

People are talking about World War III. I really don’t see that. I mean, if everyone is opposed to what North Korea is doing, even China, then it’s going to take a lot to become a world war like those we’ve seen before.

But the rogue state and its possibly insane dictator are still a threat to global security.

Nuclear weapons aren’t exactly precise instruments of destruction. You can’t just target a small area and keep the devastation contained. The explosions are massive. And the nuclear fallout is widespread.

So, yes, we should be concerned. But there’s always an opportunity hiding in an obstacle.

You may have been told that the Chinese symbol for crisis is a combination of two characters — danger and opportunity. Well, that’s not true. But at the same time, it is...

I don’t want to sound like a warmonger. In fact, much to the disbelief of many people, war is incredibly unprofitable. Sure, some companies make money supplying arms during them, but the destruction and loss of human life — especially that of the young people who make up the ranks of the soldiers fighting — is nothing but a drag on future economic prosperity.

But there is an opportunity for investors in the fear that surrounds situations like this. People want to feel safe. We want to feel like we’re protected. And a strong defense allows us that luxury.

So, it’s no surprise that while most of the country was debating what kind of shoes the First Lady should have been wearing, the markets were sending shares of our biggest defense contractors up.

There’s always a solid argument to invest in defense stocks. The world is constantly at war. Somewhere, at all times, somebody is fighting. And defense companies are providing the weapons and technology that make it possible.

But when the biggest economies in the world are gearing up for possible engagements, the revenue really starts rolling in for these companies.

So, which ones are poised to profit the most from this most recent round of international saber-rattling? Keep reading and I’ll tell you…

According to the U.S. DoD’s Missile Defense Agency (MDA), it’s made up of four parts: sensor, boost, midcourse, and terminal.

Boost is the newest technology. It’s got to do with things like surveillance drones (UAVs, or unmanned aerial vehicles) that fly around boosting the detection capabilities of the radar and satellites.

The midcourse segment consists of SM-3 missiles, ground-based interceptor missiles, and the Aegis BMD ships. These are all meant to blast an ICBM out of the sky well before it becomes a threat to its intended target.

Then we’ve got the terminal part. If the midcourse segment is unable to intercept a missile, the terminal part steps in to provide a final layer of defense. It’s made up of mobile, land-based high-altitude area defense missiles, Patriot Advanced Capability-3 missiles, and sea-based launch platforms. 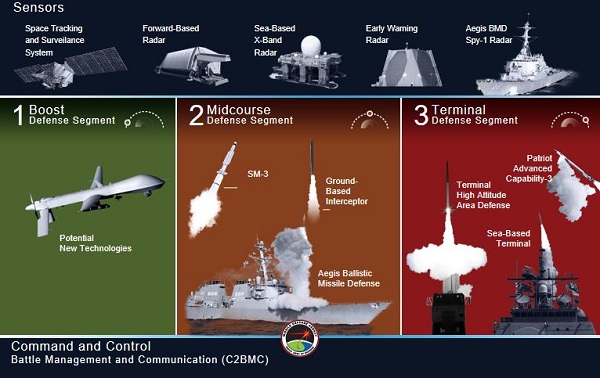 While Ronald Reagan’s dream of lasers shooting Soviet missiles out of the sky is still just a dream, we do have a solid net covering us from attacks via ICBM.

And Japan just asked us to help it build its own land-based version of the Aegis BMD. It already has it on its ships but wants one closer to home to defend against the threat from North Korea. And it wants it even more after this week’s launch.

There are two companies that stand to benefit the most from a new system for Japan and continued strengthening of our own system. In fact, their products make up most of the U.S. missile defense system.

Lockheed Martin (NYSE: LMT) makes both the Patriot Advanced Capability-3 missiles and the Aegis Combat System that drives the second two segments of the missile defense system. And it doesn’t make them cheap.

In 2014, the U.S. military spent over $1.5 billion on Aegis systems alone. Add Japan to that, and the revenues increase exponentially. The country contracted a $1.5 billion Aegis purchase back in 2015. An additional order will boost that number even higher.

The second company that stands to benefit the most is Raytheon (NYSE: RTN). Not only does Raytheon manufacture the SM-3 missiles so important in the third segment of the defense system, but it is also making the powerful radar that lets us see them before they’re an extreme risk.

The Spy-1 that’s currently in use was made by Lockheed Martin, but Raytheon has a new version of its Spy radar that boosts the range dozens of times over. Thanks to its advancements, Raytheon won the radar contract for the new Aegis systems.

And it’s what the Japanese want for their land-based Aegis BMD system. It’s also what’s going into the new Aegis BMD ships the U.S. is getting ready to deploy.

The SM-3 missiles, which can fly over 2,000 km to shoot down an ICBM, will cost around $30 million each. And you can trust that the Japanese government (and ours) isn't going to be ordering just one or two. We’re talking about billions of dollars in revenue for Raytheon from those orders.

The Spy-6 radar (the newest and best out there) is going to set the Japanese government back a substantial amount, too. The Spy-1 radar system cost around $8.6 million in 1974 — that’s $45 million in 2017 dollars. The current cost isn’t available, but you can believe it’s going to be much higher now.

All told, the U.S. spent over $13.5 billion on its missile defense systems alone in 2014. That number has continued to rise. And with the threat of an airborne attack by North Korea, it’ll likely rise even quicker in the future.

While Raytheon and Lockheed don’t get all that money, they both get a large part of it. Plus, they’re bringing in revenues from our allies (including Japan) at the same time.

I hope we don’t ever have to use those systems, but I also know an opportunity to profit when I see one.

So I say pray for peace but prepare for war with smart investments in the U.S. missile defense system.

And if you’re looking for more opportunities spurred by crises at home and abroad, check out Crisis and Opportunity, run by my colleague Christian DeHaemer.