My Next Two Stock Picks

According to Deloitte, this is how much Canadians are expected to spend on cannabis products next year.

Once this report came out, Wall Street hot shots spit out the data to their clients so they could get a piece of this action.

And this, dear reader, is why those Wall Street hustlers are useless.

Everything they’re now telling their clients about cannabis stocks is basically what I told investors more than three years ago.

While those who waited for the go-ahead from Wall Street are now rushing out to buy a bunch of overpriced pot stocks, members my Green Chip Stocks investment community are sitting on nearly a dozen double-, triple-, and even quadruple-digit gains in the cannabis space.

That’s nearly a half-million dollars from one single pot stock!

Now, understand, I’m not telling you about this to chest-pound. At this point, that’s not something I need to do.

Instead, I’m telling you this to illustrate a very important truism: When it comes to the cannabis market, Wall Street is clueless.

Buy What Wall Street is Scared Of

Today, the blowhards on Wall Street are telling everyone about these exciting new Canadian cannabis stocks because later this year, cannabis will be fully legal there.

This is great news for those who invested three years ago, but quite useless information for those looking to make any money from the Canadian cannabis space now.

Listening to analysts talk about how the Canadian cannabis market is a great investment opportunity is like listening to someone tell you how the internet is going to be the next big thing.

Because while they’re doing little more than making us rich by getting their clients to jack up the share prices of the stocks we already own, we’re exploiting a much more lucrative cannabis market that Wall Street is still sleeping on.

You see, in terms of building a strong and profitable cannabis industry, Canada is already there.

This is a done deal, and quite frankly, the big money has already been made.

But in the U.S., well, this is a cannabis market that’s just getting started.

In fact, it’s very reminiscent of the early days of the Canadian cannabis market, when you could buy shares of Canopy Growth Corporation for $1.40 (now trading at $39 a share) or OrganiGram Holdings for $0.40 (now trading around $5.40 a share).

It’s a beautiful blank slate that Wall Street is too scared to touch, but we’re going all in.

In fact, we’re already reaping the rewards of getting in early on the U.S. cannabis market.

There are a number of public cannabis companies that have exposure to the U.S.

One of our favorites is a company called MariMed (OTCBB: MRMD), which I actually told you about back in April.

This is the company that has its hands in everything from cultivation to dispensaries, and it has the greatest exposure to the U.S. market of any U.S. cannabis player.

When I first told you about MariMed, you could’ve picked it up for $1.09 a share.

That’s a gain of nearly 60% in just two months.

Of course, that’s nothing compared to what members of my Green Chip Stocks community have made on this one. 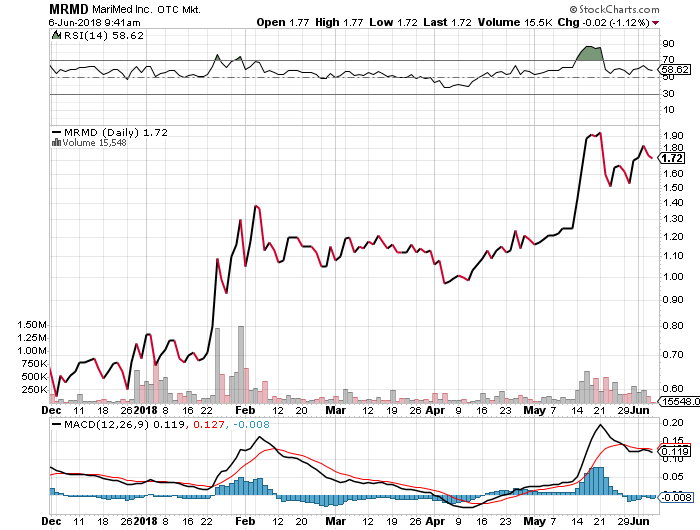 But MariMed is just one of about five quality cannabis stocks that have exposure to the U.S. Some of those stocks can be found in our Green Chip Stocks portfolio, and I’ll be adding two more to our portfolio over the next few weeks.

When I send out those buy alerts, you can get them, too... and, of course, make a boatload of cash in the process.