Less than a week ago, a Wood Mackenzie report confirmed what we've been waiting to hear for years...

China's gas woes are getting worse.

The report went on to state that China will be experiencing gas shortages every winter — for the rest of the decade.

Unfortunately, the only way the Chinese can attempt to make up this shortfall is through ramping up LNG imports. The price will be incredibly steep, too, with LNG shipments costing upwards of $20/MMBtu right now — a far cry from the sub-$4/MMBtu prices on the Henry Hub this morning.

As my veteran readers know, China's natural gas production is nowhere near capable of keeping pace with the nation's growing appetite for natural gas.

And you can forget the country's massive shale gas deposits, since it'll take at least another decade for gas to start flowing from those wells.

Don't worry; we know where China plans on buying this gas future supply...

For the last five years, dirt-cheap prices have plagued any and everyone exposed to natural gas, forcing companies to switch to more liquids-rich areas.

If you think we've had it bad in the U.S., know that things were much worse in Canada, where gas prices deteriorated as shale production in the lower 48 states soared higher.

More than 18,000 natural gas wells were drilled in Canada in 2007. By 2012, that number had fallen to less than 2,000. Despite this severe drop in activity, however, there was some good news in the western part of the country, where output from unconventional gas plays started to take off: 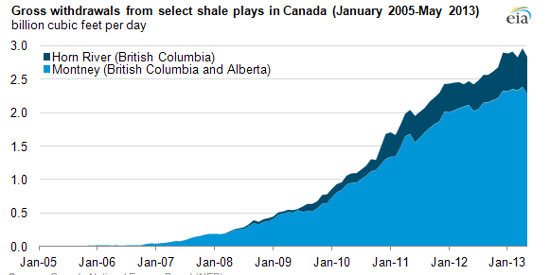 This chart shows the future of Canada's natural gas supply.

I can't help but wonder if this comes as a surprise, considering Canada's conventional gas production has been in disarray for decades...

In the 1980s, Canada had about 100 trillion cubic feet of recoverable natural gas reserves left. Less than 25 years later, that amount has fallen nearly 40% — with more than 98% of the country's conventional gas output coming from the Western Canadian Sedimentary Basin.

It's about time the Canadian gas industry got back on its feet, don't you think?

Wondering if there are any strong investments left in Canada's gas industry?

To be honest, the single-largest drilling rig contractor in Canada, Precision Drilling Ltd., has struggled to break even for shareholders ever since natural gas prices started plummeting five years ago.

But the truth in any sector is they can't all be winners. And the same goes for the LNG race.

You see, it's the players that can tap Canada's rich shale gas resources in British Columbia that are uniquely positioned to outperform anyone else in the country's energy sector.

Take a look at the kind of value one small Canadian driller has returned to shareholders compared to Precision Drilling: 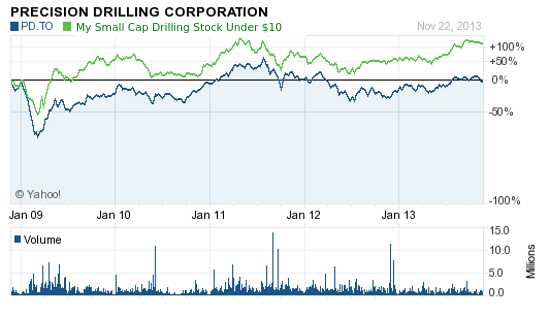 To add insult to injury, my small-cap driller is operating with half the number of rigs out in the field!

This driller is just one of four gas stocks stacking the deck right now to take advantage of China's runaway natural gas demand.

As I said, picking an LNG winner is about more than looking at companies holding a geological advantage over U.S. LNG exporters, or even knowing where to drill...

At the beginning of 2013, Canada's National Energy Board estimated there were approximately 1,093 trillion cubic feet of marketable natural gas resources left in the country, nearly 80% of which could be found in the Western Canadian Sedimentary Basin.

Just as in the United States, this future gas production will not come from conventional wells... 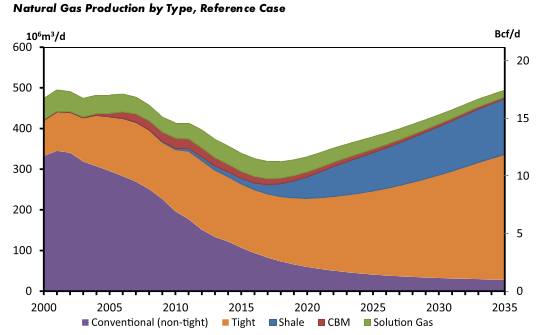 And keep in mind it's not necessarily which massive shale play a company is operating in that determines its success...

More than anything else, the most successful companies going after these unconventional resources are utilizing the advanced drilling technology vital to extracting the oil and gas from these loaded rock formations.

I suggest finding a few minutes to learn about these technological advances in drilling for yourself.

The game has changed — and you don't want to be left on the sidelines.