The Smart Money in Canadian Energy

When we rolled into Fort McMurray, the sky was struggling to hold onto the pinkish hue of dawn.

It was then that my colleague informed me of a slight problem: The town was nowhere in sight. 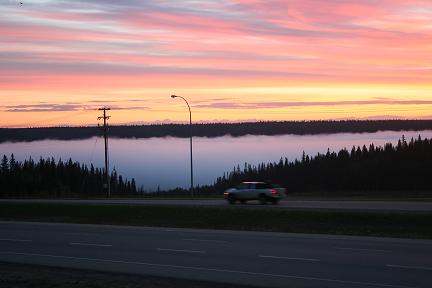 Don't worry, we eventually found it... We were definitely in the right area; Highway 63 is the only road between Fort Mac and Edmonton.

Though it wasn't the near flyby that held our attention after settling into the only hotel that would allow us to check in at that time of day...

It was the very first thing I noticed when I stepped into the room: everything had a nice neat plaque next to it with Chinese writing.

Just what was so telling about this?

For starters, a war has been brewing between China and the United States for the better part of three decades — more than 170 billion barrels of recoverable oil tends to do that — and our thirst for more Canadian crude has building since 1980.

(You can see that for yourself with one quick glance at the EIA's import data.)

But why Fort McMurray and the oil sands?

The Athabasca oil sands are right in Canada's oil sweet spot — the Western Canadian Sedimentary Basin (WCSB), which holds over 97 percent of the country's oil reserves. And things haven't been too good lately for conventional oil drillers in the WCSB. We truly have an unconventional future ahead for oil production.

So will the two biggest kids on the energy block inevitably come to blows over Canadian energy?

Admittedly, the Chinese labels on everything in our hotel should have been expected.

Over the last few years, we've seen headline after headline on China's interest in the Canadian oil sands:

Although the government has repeatedly said they wouldn't allow a complete takeover of their oil sands industry, they have certainly welcomed foreign investments.

Can the Chinese be any clearer as to what they're after?

The United States could easily come out on the losing side of this energy war, and that begs the question...

I'll let you take your pick, but we know which we'd prefer.

The problem is we may not have a choice — especially if we shut out our largest source for oil imports. While the Chinese are willing to pour billions into Canada's energy industry, we can't help but wonder if the U.S. is trying to throw the match.

Canada has become one of few countries left with a strong outlook for oil production. Not only is their oil production secure, but you don't need a map and your fourth grade geography teacher to tell you it's much less volatile than Saudi crude. (Someone might have to remind Congress of this fact.)

There's also environmental uproar over the proposed Keystone XL pipeline, which will ship as many as 900,000 barrels of bitumen to refineries along the Gulf Coast.

If we don't buy their oil, China will.

Because if the world's largest oil importer suddenly develops an aversion to Canadian crude from the oil sands (I don't even want to think where we'd go to replace our current imports from this source), the world's second largest importer — in this case, China — will have no qualms taking it. The Chinese will step up and build a pipeline to Canada's west coast, and then ship it across the Pacific.

And the smart money will play both sides.

There are two surefire ways to profit in this scenario.

We've covered the first many times right here in the pages of Energy and Capital.

It involves the kind of infrastructure plays that I just mentioned above.

As you can see, both TransCanada and Enbridge have managed solid gains despite the latest market volatility: 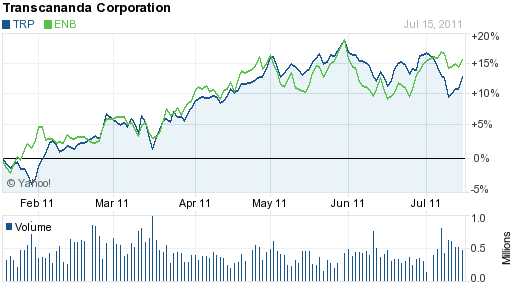 Any increase in oil sands output would be nearly worthless if they can't get that oil to market. And it won't make a bit of a difference if that oil is being sent to the United States or China.

The second is no stranger to most of my readers. This company has pinned down some of the most profitable in-situ stocks to date —  and their most recent play is no exception. Within the next decade, production is expected to surpass the Bakken's current production rate.

You see, the current mining operations that receive so much of the negative press in today's media can only reach about 20 percent of the entire bitumen resource base. The real value of the oil sands lies much deeper — and within a short matter of time, will be the dominant production method.

By the time these companies ramp up production, we'll know exactly which side will have come out ahead.

Let's hope it won't be us asking the Saudis for more oil...