Canada has a major problem, and a lack of pipeline infrastructure lies at the heart of it.

The Calgary Herald cites a new report from CIBC World Markets, which suggests that over 2012, Canada lost nearly $25 billion in oil revenues thanks to the severely inadequate domestic pipeline infrastructure. It also suggests the nation is likely to lose at least $15 billion per year until sufficient development is undertaken.

“Notwithstanding such improvements, Canada continues to face a notable long-term challenge shipping its oil to market. The failure to invest in needed transport infrastructure could still prove costly for Canadian producers, governments, and the economy, to the extent that investment plans are delayed or scaled back.”

The difference in projected losses can be accounted for when one considers the price difference between WTI and Brent crude. That difference has narrowed considerably to about $14 per barrel.

In 2012, the gap was significantly larger, hence the fact that Canada’s losses were projected to be rather large; now that the gap has narrowed down, current and future projections are more reasonable. 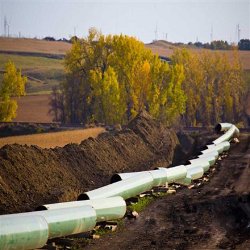 The most feasible solution to stem these big losses is to dramatically reshape Canada’s pipeline infrastructure. Such projects could run south to the U.S. Gulf Coast (via the highly controversial Keystone XL project), west to British Columbia, and east to markets in Quebec and Ontario.

While all present attractive opportunities, the report indicates that it may be most fruitful to develop pipelines to the west, in British Columbia, where oil can subsequently be sent over to the hungry markets in Asia.

However, that project is also viewed as perhaps the most difficult, considering existing (and growing) opposition amongst the First Nations and other environmental groups.

Part of the reason why Asia is the focus is that the U.S. has currently developed to a point where just 45 percent of its national domestic needs come via imports. Thus, any market growth in Eastern Canada is unlikely to be very dramatic, meaning the Asian option becomes the most attractive one.

Despite the fact that growth in China is projected to be a bit lower than usual, national demand for crude oil is anticipated to rise by 4 percent each year. And China is just one of several emerging and developing markets.

All of this, of course, increases pressure on U.S. President Obama as far as the Keystone XL project’s approval goes. If you recall, that project has been resubmitted and is currently awaiting a final decision from the President, which is expected any day now.

What with U.S. domestic production on a seemingly endless upswing, Canada is falling farther behind as long as its national pipeline infrastructure remains inadequate. The Keystone XL project would supply bitumen all the way across the nation to the Gulf Coast of Texas.

“There will be a sigh of relief if President Obama is able to put aside mere symbolism and approve a project that will have no material bearing on global climate, particularly relative to what America could do if it took its own coal appetite seriously.”

And TransCanada Corp. (NYSE: TRP), the entity behind the Keystone XL project, is pushing ahead with its own plans to grab new markets. In a recent statement, the company proposed giving shippers two months to sign contracts that would enable them to rely on the company’s proposed Energy East Pipeline project.

That pipeline, spanning 2,700 miles, is to be Canada’s longest oil pipeline ever, transporting up to 850,000 barrels each day to markets in Montreal, Quebec City, and New Brunswick, reports Reuters. It is projected to become operational near the end of 2017, and it would allow Canada to expand its oil markets beyond the U.S.

Another big attraction here is that expanding to outside markets would allow Canada to gain revenues beyond what the U.S. pays—which is half the world price—for Canadian crude.

Alberta’s oil sands are seen as a key development area for these expanded revenue considerations. These sands constitute the world’s third-biggest reserve of crude, and it’s all on Canada to develop them effectively.

The Canadian Association of Petroleum Producers indicates that production could grow to 4.7 million barrels per day by 2020. That’s all the more reason why the existing pipeline infrastructure absolutely needs to be upgraded in order to deal with the increasing flows.