The last time I got into a row over oil prices with Christian DeHaemer, the U.S. oil industry was in a far different state.

It was years ago, before the Bakken in North Dakota became a household name.

Back then, our shouting matches would reach a crescendo in the office, and he just happened to always take the opposing position.

When I suggested in early 2007 that oil was about to make a run to $100 per barrel, he started rattling off a dozen reasons why it was about to head to 10 bucks.

And he did it with a smile.

Ah, but those were much simpler days, dear reader… when you saw the words “peak oil” more than you do Bitcoin today.

So you can probably imagine my surprise this morning when I overheard my favorite cubicle cellmate here in Charm City mutter something about $90 oil under his breath.

“That’s not what the EIA is calling for,” I couldn’t help saying.

When he looked up and saw me glancing his way, we both immediately knew who was wrong this time around.

“Actually,” I continued, “their forecasts are predicting crude to be completely flat in 2018.”

And I have a feeling the EIA will have a little egg on its face by this time next year. 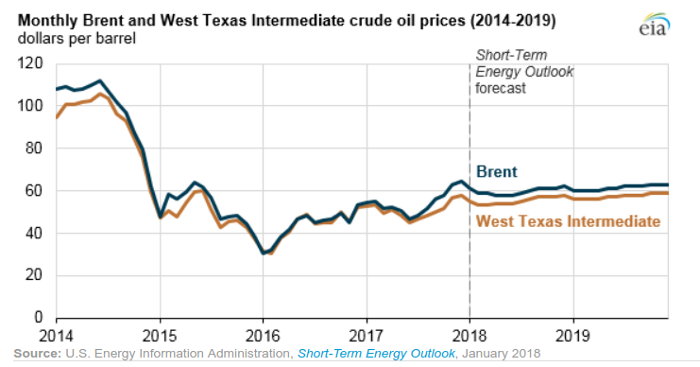 Its premise was simple enough.

OPEC would keep a tight lid on output this year, with production from the oil cartel increasing slightly this year by around 200,000 barrels per day.

But if you and I are going to be honest with ourselves, they’ll be lucky if that happens. While it’s true that countries like Saudi Arabia can turn on the taps, other members aren’t so lucky.

How much longer do you think Venezuela can keep itself from imploding? Not much longer, if you ask a mango. And once that domino falls, so do the nearly 1.9 million barrels per day that PDVSA is even now struggling to maintain (spoiler: they won’t for much longer).

I’ll even push aside the fact that Libya, Nigeria, and Iran haven’t been underwhelming when it comes to raising output. One has to wonder how many governments are still claiming authority in Tripoli. The number is more than three.

Is the EIA being a bit too optimistic?

Chris knew the same figures I did. He’s read the same reports, looked at the same charts, too.

The guy is a technical genius, and trust me, his readers love him for it.

But there’s more to his bullish projection than candlesticks.

Last year, the IEA warned everyone about one catalyst that would send crude prices soaring.

It’s that global oil discoveries dropped to a record low in 2016. Yet, it’s more than just one down year. Remember, oil companies have drastically slashed their spending over the last two years.

Let me put a little perspective on this…

Over the last 15 years, companies averaged about 9 billion barrels per year in oil discoveries. In 2016, it was just 2.4 billion.

In fact, the IEA reported that the number of oil projects to actually receive a final investment decision dropped to its lowest since the 1940s. 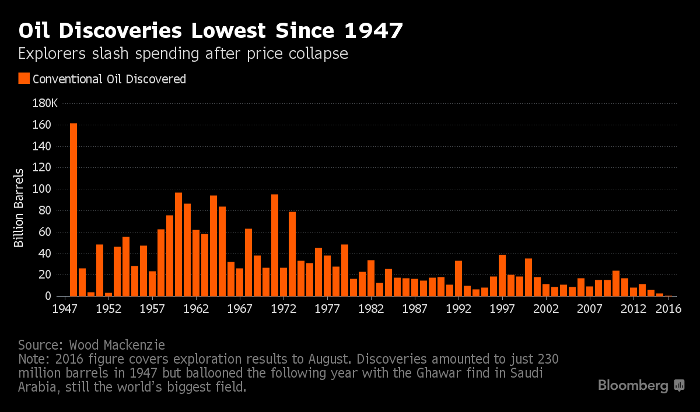 That’s going to have an effect on global production, and it won’t be pretty.

So when Chris showed me a long-forgotten oil field that’s just now being tapped for the first time, I couldn't help but get excited.

Thing is, it’s in an area I never thought possible.

Here’s what he showed me.