I live about 15 miles from historic Ellicott City in Maryland. In the past week it's rained in buckets. On one afternoon, it dumped more than six inches in three hours.

Due to development — the building of roads and parking lots — and the funnel shape of the valley, a torrent of water and mud pushed through the pre-revolutionary main street, taking out bars, restaurants, art stores, and hippy shops.

The town clock was found a mile downstream in the Patapsco River. On the TV they called it a 1,000-year flood. Two years previously they had another 1,000-year flood in Ellicott City. Many places had just rebuilt. I imagine some will stay and do it again, though I don’t know who will insure them.

Now, I’m not the brightest guy in the world, and I get that if you flip a coin 10 times and it lands on heads, the next flip is still 50/50 for heads or tails. But in this case I think the government was wrong in its assessment.

Nassim Nicholas Taleb created his black swan theory about the stock market. A black swan is a metaphor that describes a surprise event with a large impact that is rationalized in hindsight.

In the last market crash, Wall Street big shots piled out of the corner office and told us that the crash was due to deregulation, liar loans, derivatives, collateralized debt obligations, credit default swaps, subprime mortgages, interest-only loans, housing bubbles, and all the rest of it.

AIG insured $400 billion in CDOs thinking it could manage the very limited risk. Then it got hit with the 1,000-to-one shot when Morgan Stanley asked that it pay up when subprime mortgages started to fall.

Those are just some of the details. They change with the bubble, be it tulips or railroads, but one thing has been consistent since 1913: All booms are fueled by the Federal Reserve cutting rates and pushing cheap money, which finds its way into risky investments, and then the Fed raises the rates.

Many people have said it is like pouring grain alcohol into the punch bowl, letting everyone get drunk, and then taking the bowl away after the debutants pass out on the divan and the ex-Marine starts with the fisticuffs.

It leads to a heck of a hangover.

Below is the chart of the Fed funds rate in blue and recessions in gray. You will notice that before every recession, the Fed jacks up rates. Every time... 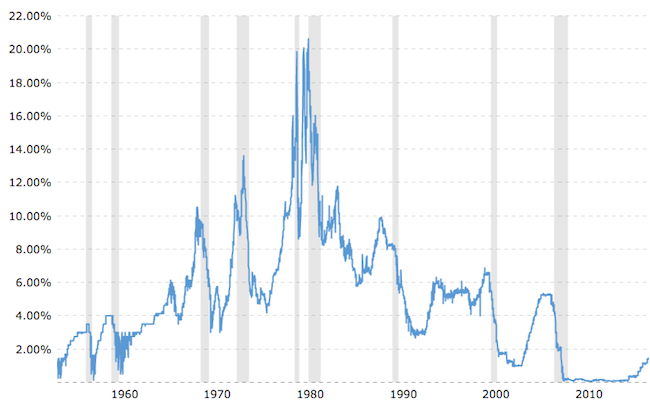 With a belly full of grog and singing along with the Federal Reserve is the U.S. government, spending money like water.

Recently the fiscally conservative Republican government produced a one-year $1.3 trillion spending bill. It sends $700 billion to the military and $591 billion to domestic agencies. Military spending will increase by $66 billion over last year, and non-defense is up $54 billion.

Including interest, this bill will add $1.7 trillion to the federal debt over 10 years, and the Treasury will run a trillion-dollar deficit every year going forward. Here is some of what it buys:

Generals are always fighting the last war, and much like the battleships at the start of World War II, it's hard to imagine that these big targets would last long against a real enemy.

Meanwhile, back at the ranch, the federal debt is now more than $21 trillion and is growing faster than GDP at 123% a decade.

If you continue that growth rate (and there is no reason to think it will stop — both Republicans and Democrats have proven they will spend), then we will have $46.85 trillion in debt by 2028.

When the next recession hits — and it will — they will say it’s a black swan. Much like AIG’s debt obligations, it was a 1,000-to-one shot they’d have to pay it off.

Which is why I’ve created a government-proof portfolio in Christian DeHaemer’s Bubble and Bust Report. At the same time, I know an investment trend when I see one. Find out how to profit from the endless growth of the federal government.

This technology will also replace 4G and could hand early investors the easiest guaranteed payouts they’ll ever receive.

That means if you position yourself properly, you’ll be in line to earn an unending series of guaranteed payouts and potentially pull in gains of 300%, 500%, and even upward of 1,500%.

Here’s our analyst Jason Stutman, who will tell you how to profit from this technology and the three stocks that will give you the biggest potential profits.