China just devalued its currency, the yuan, by the most in three months last night.

According to the Manila Times:

China’s central bank cut its currency exchange rate against the dollar by the largest amount in three months on Thursday as the greenback strengthened on improved Chinese trade data.

The Chinese mandarins are fighting a rear guard action against a slowing economy. The official GDP growth is 6.7%, but many China economy experts believe it is less than 4% and shrinking.

The government wants a strong U.S. dollar and a weak yuan to boost exports to the U.S. and maintain its economy. They know very well what happens in a totalitarian regime once the people get hungry. The number of riots in China is climbing. Two months ago, the state laid off 1.8 million coal miners and steal workers.

What does this Chinese dollar debacle mean for gold and oil? Well, I’ll tell you.

Above is the one-year dollar/gold chart. As you can tell, when the dollar goes up, gold goes down, and vice versa.

The dollar has fallen 5% over the past few months. This is a big move in the currency market.

The Chinese didn't like it and cut their currency last night. Today the dollar is up and gold is down. This dip will give us a second opportunity to jump on the gold bandwagon.

Over the past few months, we’ve been making a lot of money in oil, lithium, and silver. But did you know there is a simple way to get more bang for your buck? Here is how to make the most out of your money...

The trick to making money off of small moves in the dollar is to leverage up into the miners.

But the price of junior miners is up about 100%.

This is because for the most part, costs are fixed. The price of a mine, employees, energy, and machinery is in place. If the company is making money with gold at $1,000 an oz., think of how much it is making when gold hits $1,250 an oz. All of that money goes straight to the bottom line.

But if you really want to make money in the next precious metal upsurge, you have to buy silver.

Here is the 20-year gold–silver ratio: 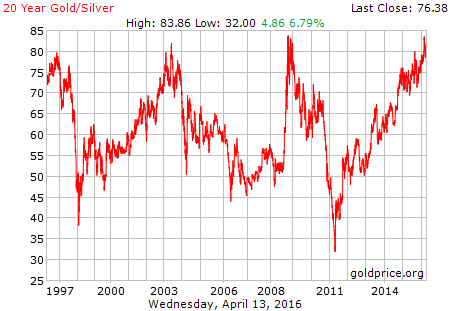 The deal is when the gold–silver ratio comes back below 80 on its way back to the mean, the price of silver skyrockets. In 2011 it went to $51 an oz. Silver miners, like gold miners, do even better — some go up more than 1,000%.