I'm confident you remember the fateful report released by the USGS in April of 2008.

You know the one I'm referring to: The USGS reassessment stating the Bakken Formation contained about 3 billion barrels of technically recoverable, undiscovered oil.

Hardly anyone outside of North Dakota had heard of the play at the time — and many of those people didn't believe we would unlock the huge shale resource...

They were quickly proven wrong.

Not only did the Bakken become one of the biggest investment hot-spots in the U.S. oil patch, but we knew deep down the 2008 report was just the beginning. And we've been waiting patiently for vindication in the years since, confident the USGS would eventually come out and set the record straight.

It only took them five years to tell us what we've known all along.

Better late than never, I suppose...

You've probably heard by now how the government boosted their oil reserves in the Williston Basin by over 100% in their latest assessment of undiscovered oil resources in the Bakken and Three Forks Formations, Williston Basin province, Montana, North Dakota, and South Dakota.

Those of you with skin in the oil game should know the area well enough. I'll even bet that, when it comes to the North American energy boom, this is one of the most recognizable maps out there: 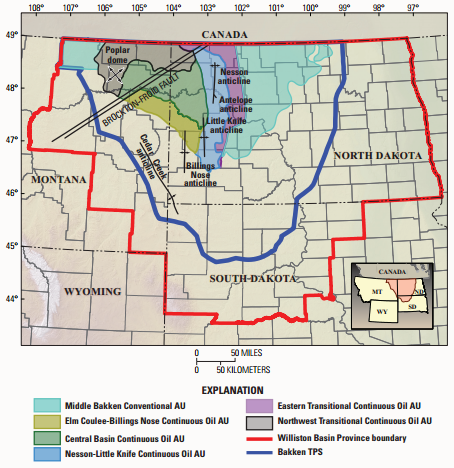 That's quite a jump, given the time between surveys. In fact, it's one of the shortest periods between reassessments the USGS has ever done. Usually it takes up to a decade before they decide to go back in and reevaluate a resource play.

And yet those who glossed over the report, only paying attention to the jaw-dropping headlines to hit the media, are missing out on the real details...

Believe it or not, it's not the Bakken Formation that's behind our latest bullish sentiment in the Williston Basin.

No, the reason for sudden estimate jump was due to the addition of the Three Forks Formation.

(Mind you, we've been talking about the Three Forks for the better part of five years.)

Buried in the USGS report was a statistical breakdown of different areas that were assessed. And here's the surprising part: Their estimates for the Bakken remained relatively unchanged!

The report concluded the Three Forks held a mean of 3.7 billion barrels of undiscovered oil.

In other words, the Three Forks accounted for more than half of the reported 7.4 billion barrels in the Williston Basin.

That might not be the 500 billion barrels that previous unpublished reports have touted in the past, but I suspect things are about to heat up in the Williston Basin going forward...

The Road to 1 Million Barrels a Day

Considering the feverish pace with which companies are drilling into the Bakken, don't be surprised to see the USGS scurry back to North Dakota before 2018. In fact, I think they'll return a lot sooner than that.

The state's year-over-year crude output in January jumped more than 200,000 bbls/d to 738,000 barrels a day. And at that pace, North Dakota will be on track to hit the one million barrels per day mark by early 2014.

Let's be clear here: Nobody's questioning if it will reach that high; they're just wondering when it'll finally happen.

Pressure will start building again for another assessment once the state surpasses that benchmark, and the USGS will once again book their flights to Williston (of course, finding a hotel room will prove to be another problem altogether).

Fortunately, you don't need to wait another five years to see the green in your portfolio...

The trick will be to capitalize on how these companies are driving production to record levels — which in turn will trigger more action on the part of the USGS.

You see, more important than the next Bakken/Three Forks survey is the drilling technology that will unlock the 7.4 billion barrels of oil found in this play.

And this is precisely what individual investors can use to distinguish the most profitable Bakken stocks from one another.

Keith Kohl for Energy and Capital

P.S. For those of you who would like to dig even deeper into the latest USGS assessment, you can access the report directly by clicking here.