Are We Watching the Lithium Bubble Burst?

Influx of new producers threatens to flood the market...

There’s a lot to be said for market predictions.

There’s a lot to be said against them, too, but let’s look at the positives for a second here.

If we didn’t have market prediction tools, we’d all be stumbling through stocks hoping to pick a winner. You’d win a few but lose a lot.

On the other hand, we all know that no one ever made a fortune blindly following the orders of guesswork “gurus” on the Internet. You’ve got to keep a healthy measure of skepticism on you at all times.

Which is why when you read the recent headlines claiming that the lithium bubble bust is upon us, I hope you're questioning the situation at least a little bit...

These inflated claims come on the back of news from Argentina: the government has recently lifted many of the currency controls and taxes that kept foreign businesses from looking to make a move on the country’s abundant resources.

With those restrictions gone, it’s open season on lithium.

Nearly 40 mining companies have already begun making plans to move in on the area. More than half of them are honing in on the lithium trade.

Predictably among them are lithium giants Albemarle, SQM, and Jiangxi, plus major miners like Glencore.

This has caused every bear on the market to start seeing a lithium glut on the horizon, now that a massive resource has seemingly opened the doors to a new flood of producers.

That won’t actually be the case for a few key reasons...

We’ll start with the fact that lithium isn’t all that rare anyway.

What gives lithium its elusive nature, and what still makes me think we’re looking at a shortage in the next few years, is that those mining methods take a lot of time and money.

Long story short: mine production costs millions, sometimes billions of dollars more than brines, but brine production takes longer since it relies largely on nature to get the job done.

Now a lot more companies are getting a chance to prove they can viably extract one of the world’s most necessary metals from the biggest resource on the planet.

But rather than a sign of doom, what we’re seeing are signs of a maturing market.

What I mean by that is lithium won’t always offer the burgeoning gains we’ve seen in the past few years. Once we see the newest producers on the market today hit their stride, lithium will become a long-term play as it ends up being just as ubiquitous and profitable as, say, crude oil.

We don’t call it “metal oil” for nothing, after all.

Another thing to keep in mind is that it will take a few years for all those new companies to get production up and running, and lithium demand won’t be declining in the meantime.

Of course, we’d be remiss if we took this all in stride without finding equally lucrative opportunities to take advantage of.

If we’re looking at a possible lithium shortage within the next few years, I think it’s safe to say that cobalt is already there.

This metal is an oft-ignored but extremely important part of today’s lithium battery makeup.

Tesla, the company that started the lithium rush with its EV and home battery designs, is scrambling to find a sufficient source of cobalt now, too.

Unlike lithium, cobalt is not usually mined by itself. More often, it’s a byproduct of copper or nickel mining.

What’s become abundantly obvious is that this can’t continue.

Companies around the world would have to nearly double copper production to keep up with growing cobalt demand.

In response, the price of cobalt is on the rise. It’s already higher than it’s been in nearly a decade: 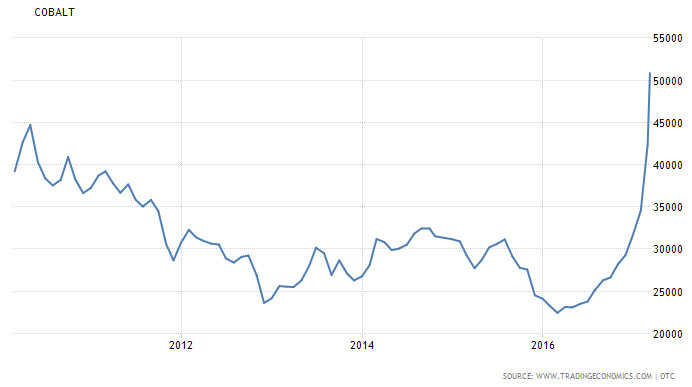 It’s become a race to see who can get a steady supply first... Tesla isn’t the only company building massive battery factories anymore, and the EV market is expanding fast!

As of now, there’s no one in the cobalt industry stepping up to bat.

And remember that large-scale lithium operations can take years to get underway, too.

What we’re looking at here is a two-for-one deal: cobalt and lithium taking off together, an opportunity for investors to use two booming metals to make one huge profit.