Are the IEA's Warnings Falling on Deaf Ears?

Five Stocks for an Energy Crisis

There's no question about which direction we need to move...

The IEA's executive director, Mr. Tanaka, was perfectly clear when he stressed the fact that renewable energy will have to play a leading role in reducing carbon emissions and diversifying energy supplies.

But the release of the IEA's latest Oil Market Report this week indicates their warnings have fallen on deaf ears...

Here are a few highlights from the report:

As you can see below, demand is headed higher.

And to think there are still people who believe $100/bbl oil prices will never happen again...

Today, companies are forced to drill at the ends of the earth in futile attempts to increase global production.

The era of cheap energy is over.

You've probably heard this phrase tossed around more than once on the pages of Energy and Capital.

The first thing I think of when I hear the words cheap energy are those super-giant oil fields of the past — the five million barrels being pumped out of the Ghawar oil field every day, for example.

Haven't we learned our lesson from the once-mighty Cantarell field in Mexico?

The death of Cantarell will have greater repercussions than we can possibly expect. (I'll cover those in more detail over the next few weeks.)

It's important to note that not only the cheap, easy-to-get conventional oil is having problems...

Areas like the North Sea — which at its peak in 1999 was pumping nearly six million barrels out of the sea floor — are also facing obstacles. Today, North Sea production is half that amount.

The Arctic may turn out to be the final frontier, and countries are willing to do anything to get to it.

Russia recently inked a deal with (of all companies) BP to explore for oil and gas in deepwater Arctic areas. I guess BP's offshore reputation didn't deter Putin.

Then again, we already know how Russia deals with major oil companies.

I have my doubts about whether or not Venezuela will be able to efficiently develop its heavy oil assets in the Orinoco belt. As I've said before, the country must spend billions each year just to maintain current production.

What, then, are we left with?

Fortunately for investors, it's not all doom and gloom...

Five energy stocks for a crisis

I can certainly understand the hesitancy of some investors. When the energy markets hit the fan during the latter half of 2008, holding our long-term confidence was difficult.

At times, it was a struggle to resist joining the rest of the herd and sell.

But once you take a step back and see where things are headed, it becomes much easier to hold onto the long-term energy bull... 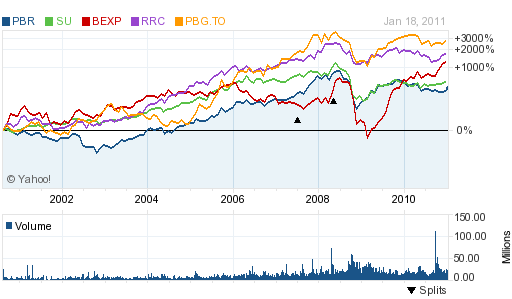 Over the long run, these five energy stocks — whether drilling off the coast of Brazil, unlocking the massive oil and gas shale formation, or tapping into vast deposits like the Canadian oil sands — have all delivered for investors.

Perhaps it's about time you joined them.

You see, when it comes to meeting the world's future energy demands, it's all about technology.

Let's face it, companies have already scoured the world for the next Ghawar... And they've all come up short.

Today, the oil and gas fields left will take trillions of dollars to bring into production. The only factor that can improve their efficiency is technology.

I've recently found a small company that's working on the technology side of things... Right now, they're flying under Wall Street's radar, quietly perfecting a revolutionary technique called petro-fracking that could change the shale boom forever.

And thanks to a severe overreaction by the market, you are in a perfect position to join my readers and I in our next round of gains.

Just click here to find out more about this investment opportunity.