Are Platinum Prices Set to Soar?

Platinum is the best buy among precious metals right now.

It's more affordable than gold and, some would argue, more useful.

Trading now at around $1,000 an ounce, platinum could outperform both gold and silver over the next several months.

Platinum has much more in common with silver than it does with gold. That's because, unlike gold, platinum plays a role as an important industrial metal.

About 40% of the world's platinum demand comes from the automobile industry. Platinum is a key material for the production of catalytic converters, which have been a standard and regulated part of vehicles since the 1970s. And another 20% comes from other industrial applications.

But like gold and silver, platinum is also a proven hedge against crumbling equities markets. And during downturns in stocks and bonds, investors will flood into platinum, causing wild swings in prices.

Between August 2007 and February 2008, the price of platinum shot up 70% as the U.S. entered the Great Recession. To compare, gold prices increased 45% in the same time frame.

Investors began to raise fears that the U.S. economy could pivot into recession at the end of 2015. And the disappointing employment report on June 3 has whipped up new angst over recessionary pressures.

The Wall Street Journal reported last week that 21% of the respondents to its monthly survey of economists believed America will enter into recession within the next 12 months. Editor Josh Zumbrun writes, “That’s about double what they were a year ago. Not high enough to panic, but high enough to pay attention.”

It’s not a recession, at least not yet, but it is definitely a pause in the economy’s progress.

Should this pause worry you? Yes. Because if it does turn into a recession, or even if it goes on for a long time, it’s very hard to envision an effective policy response.

As more investors start to see a slowdown in U.S. economic growth on the horizon, the demand for recession inverse assets like platinum will swell.

To cover this deficit, producers will likely dip into their significant platinum stockpiles, which have provided supplies during labor disruptions and helped suppress prices.

Global platinum stockpiles are forecast to fall this year about 20% to about 2 million ounces according to the World Platinum Investment Council. Despite this rather large global stockpile, consider the appetite for gold (the #1 recession inverse metal) right now...

In the first quarter alone, demand for gold coming from ETFs was over 11.5 million ounces. Total investment demand nearly topped 20 million ounces. And that was just one quarter!

Even a small fraction of those gold investors diversifying into platinum could send prices soaring.

We can be certain that we'll be hearing the “R” word more often in the coming weeks and months. And it really wouldn't take very much demand at all relative to the appetite for gold to send platinum prices skyward.

Trading at just about $1,000 an ounce right now, platinum could shape up to be the top-performing precious metal from here on out.

There are several ways to invest in platinum. The most direct way is to own the physical metal.

However, production of these coins is limited, and they sell at a high premium over spot platinum prices. With CME platinum prices at about $1,000 an ounce, a one-ounce American Platinum Eagle would set you back at least $1,300 right now.

A much more affordable and well-known platinum bullion coin is the Canadian Platinum Maple Leaf. Still, the premium for these coins is high relative to gold bullion.

Buying is easy. Every major online bullion dealer sells physical platinum and will ship it right to your house. But few will buy your platinum back.

A local coin and bullion shop might buy some platinum from you. But I would make sure you have a buyer lined up before any large investment. I personally own only very little physical platinum due to liquidity.

A much better way to get leverage on physical platinum is simply through one of the ETFs. 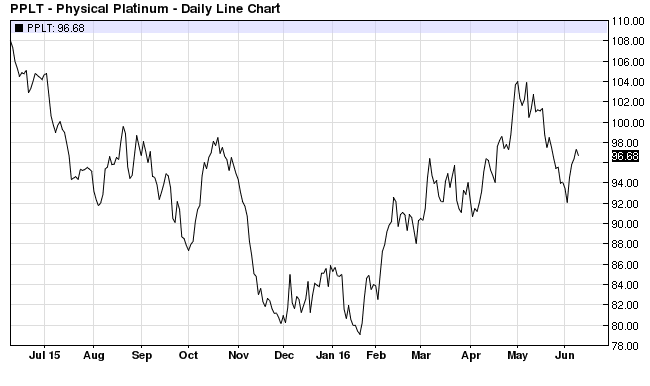 Both of these company mainly trade on the South African JSE Limited. However, they also have ADRs, which are easier for Americans to buy and sell:

Another platinum mining stock to consider is Stillwater Mining Company (NYSE: SWC). Shares trade right on the NYSE, and the company is well known for being the only U.S. producer of platinum and palladium. I mentioned Stillwater in my list of top 10 mining stocks for summer 2016.

Investors should be aware that platinum prices can be quite volatile. It should be noted that the 70% increase in platinum between August 2007 and February 2008 was followed by a drop in prices just as impressive. 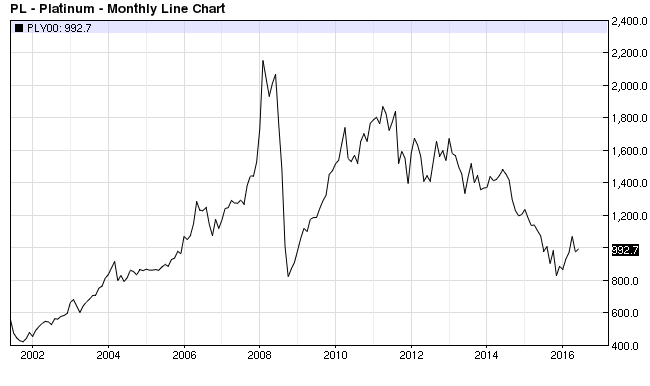 So it would be wise to always use stop-losses to hedge against significant losses when buying equities and sell on any significant gains immediately.

Renewed fears of a slowdown in U.S. economic growth combined with a global supply deficit and a market hungry for recession inverse assets provides strong support for investment in platinum. Trading at around $1,000 an ounce, I think platinum is the best buy among precious metals right now.