It All Comes Down to This

If I told you that we could predict the future by looking at clocks and watches, you'd probably think I was a little strange, perhaps even a bit insane.

After all, the entire purpose of clocks and watches is to tell the present.

Yet I assure you that the above statement is true. And I'm certain you'll agree after giving me a few minutes to explain...

Up until the 16th century, watches did not exist. There were only stationary clocks.

It wasn't until the 1500s that timepieces became small enough to carry around.

The initial transition from clocks to watches during this time period resulted in what was unsurprisingly known as "the clock-watch." Clock-watches were worn as pendants around the neck. They had to be wound twice a day, only had an hour hand, and were incredibly cumbersome due to their cubic and brass construction.

By the first half of the 17th century, jewelers were able to significantly reduce the size of timepieces, and men began wearing watches in their pockets instead of as pendants...

For the next three centuries, these pocket watches were the timepieces of choice.

Then in 1880, a man by the name Patek Phillippe invented the world's first wristwatch and disrupted the entire timepiece industry. By the end of the 20th century, wristwatches became a notorious status symbol, while pocket watches were reduced to mere tokens of days past.

In terms of function, the clock, clock-watch, pocket watch, and wristwatch are all essentially the same in that they notify us of the time.

Of course, there were subtle improvements in accuracy and additional dials added over time, but the core function of these products never changed. And if you look at the evolution of timepieces over the last 500 years, portability — not function — was the most significant factor driving transformation.

I bring all of this up because we are on the cusp of a very similar transition, one that will closely mirror the evolution of timepieces.

Today, the desktop PC is comparable to the stationary clock. It sits in your home or at the office and notifies you of important information.

As with the clock, the PC eventually evolved and got smaller. It reached a transitional phase similar to the clock-watch. This device was known as a laptop. The laptop's functions remained essentially the same as its larger predecessor. And like the clock-watch, we began to carry our laptops around by a strap.

But these devices were still too clunky and needed to be smaller and sleeker... and just as we embraced pocket watches, we began putting little computers in our pockets and called them smartphones. Once again, we adopted a smaller device in favor of portability.

And just when we thought it couldn't get any more convenient, someone comes up with the brilliant idea to wear these devices on the wrist...

While it might be difficult for us to believe today, the truth is that in 1880, wristwatches were looked at with much disdain. The pocket watch had been in use for 300 years at that point. It had become a masculine status symbol — so much so that men of the time were actually quoted as saying they would "sooner wear a skirt than a wristwatch."

When droves of soldiers returned home from the Great War preferring wristwatches to pocket pieces, the stereotype was quickly broken. As trivial as it once seemed, the convenience of moving a watch to your wrist was something society was actually willing to accept — and came to prefer.

Today we find ourselves in a similar place of cultural acceptance: smartwatches and other wearable computing devices are for nerds, girls, techies, hipsters, and geeks...

But we should know better than that.

We understand that fashion is both dynamic and subjective. All it takes is one cultural icon to kick off a fashion trend. In the 1920s, it was the Great War soldier. Today it will it come in the form of celebrities and name brands.

Anyone who has kept up with my recent commentary on the tech sector is well aware that that I've been highly critical of Apple Inc.'s (NASDAQ: AAPL) performance as of late...

I've often pointed out the company's diminished market share, poorly focused demographic targeting, and lack of innovation over the greater half of the last decade. I've actually picked on Apple so much that I've received a few messages from fans defending their coveted brand.

The truth is I have nothing personal against Apple whatsoever. As a matter of fact, I'm waiting for an indicator that this company will rebound, as shares are down 34% over the last 12 months.

Besides a brief surge in shares, thanks to a stubborn Carl Ichan dumping his money into the company, Apple has been taking a beating this year.

The company's reveal of the iPhone 5c and iPhone 5s was predictably dull, and shares have plummeted as a result. 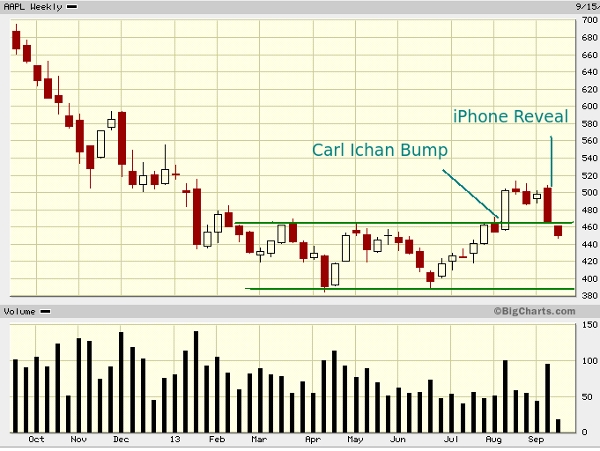 If we ignore the effects of the Carl Ichan bump, we are currently looking at a weekly resistance near $465 and a floor of $390 for a stock that was trading above $700 last year.

To top it all off, current Apple investors still have two bad pills to swallow...

Of course, none of this is to say that Apple is out for the count...

It just means we'll likely have a little more time before shares bottom out. Particularly, we will want to see if the $390 support is reaffirmed.

As for a non-technical indicator, we are keeping a close eye on Apple's positioning in the smartwatch and general wearable market.

One of the things that Apple does still have going for it right now is brand name recognition. Even in China, where its market share is incredibly weak, the company is absolutely adored. And in 2012, Apple topped Forbes's list of "The World's Most Powerful Brands."

When it comes to the inevitable smartwatch trend, Apple will without a doubt be among the top competitors with its highly anticipated iWatch.

With brand power dominance, it's entirely possible that Apple will be the cultural icon (much like the Great War soldier) to spark this next step in computer evolution.