Anadarko Petroleum Corp. (NYSE: APC) has announced that it has struck upon a new natural gas find just off Mozambique. Separately, the company has also completed drilling a well off Kenya.

Anadarko’s Orca-1 discovery well came upon about 190 net feet of natural gas pay in the Offshore Area 1 in Mozambique’s Rovuma Basin. The company has a 36.5 percent working interest in that block, the Wall Street Journal reports. 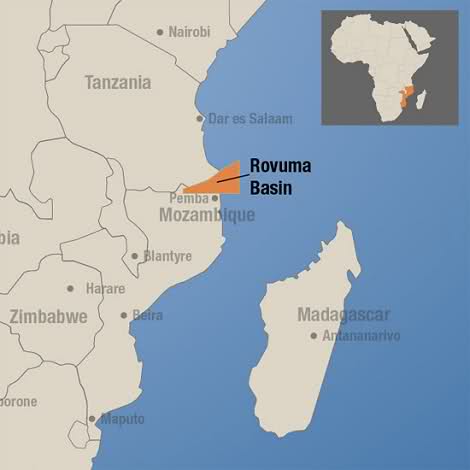 This find marks the latest in a series of successful explorations by Anadarko in the Mozambique area. The company also has significant operations in the Eagle Ford shale in Texas and the Wattenberg shale in Colorado.

Anadarko is presently at work coming up with a preliminary two-well program to appraise the new find and get a clearer sense of what the Orca-1 has found. Moreover, Anadarko and Videocon (based in India) are seeking buyers for a 20 percent share of the Rovuma Basin block. It’s expected that Shell (NYSE: RDS.A) or ExxonMobil (NYSE: XOM) might snap it up.

Since the Area 1 block has proven fortunate for Anadarko, the company expects to see two liquefied natural gas facilities built, each processing up to 5 million mt per year, Platts reports. Total investment in these offshore operations and the LNG trains construction could run to $15 billion.

Mozambique has attracted attention in the recent past due to a series of rich gas finds. Together, Anadarko and Eni (NYSE: E) of Italy have discovered around 150 trillion cubic feet of natural gas.

Other notable discoveries include the Prosperidade complex, which came up with 17-30 trillion cubic feet of recoverable natural gas, and the Tubarao discovery, currently still under exploratory appraisal.

The interest in Mozambique is clearly running very high. Earlier this year, India’s state-run Oil and Natural Gas Corporation (NSE: ONGC) was looking to purchase 10 percent of Videocon’s stake in the Rovuma Basin’s Offshore Area 1 block. Videocon was hoping for $3 billion, but that was deemed a bit too high. Negotiations are in process.

Regardless of the outcome, many companies are seeking ways to exploit Mozambique’s obviously rich reserves of gas to produce LNG that can be exported to the burgeoning markets in the East.

The Cabo Delgado facility in Mozambique is expected to be operational by 2018 and should have a processing capacity of up to 20 million tons of LNG per year.

Over in India, ONGC, Bharat Petroleum Corporation Ltd., and Mitsui Group of Japan are working on developing an import terminal for LNG at Mangalore. The LNG produced in Mozambique would be piped to Mangalore and thence to the southern cities of India.

But Anadarko's other completed well turned out to be a relative disappointment. The Kubya well in the L-07 block off Kenya’s shores just came across non-commercial oil shows in reservoir-quality sands.

However, the well did test-run different play concepts and provided some measurable data that could prove useful in further analyzing the 6-million-acreage that Anadarko is working on in the region. According to Daniels, the rig is set to be moved further south to begin drilling operations on the Kiboko well.

Anadarko shares are up nearly 8% so far this year.

Shale Doubles Natural Gas Resources
A recent study by the Potential Gas Committee has shown that recoverable natural gas reserves are much higher than last estimated...
Natural Gas Flaring
Even as gas production in North Dakota grows, the percentage of gas flared remains the same. This highlights the shale gas infrastructure problem and the importance of companies with a solution...
Canada's Gas Crisis
Canada's natural gas industry is critical to its future. Editor Keith Kohl tells readers how to take advantage of the country's growing natural gas crisis.
Hydrogen Fuel Cells: The Downfall of Tesla?
Lithium has been the front-runner in the battery technology market for years, but that is all coming to an end. Elon Musk is against them, but Jeff Bezos is investing heavily in them. Hydrogen Fuel Cells will turn the battery market upside down and we've discovered the tiny company that is going to make it happen.