Because while the man has a place in history among the more famous names of the oil and gas industry, he is often overshadowed by the likes of John D. Rockefeller and Edwin Drake.

Back in 1943 in Dawson County, Texas, a small discovery well was drilled on Abner's farm. Although the well showed lackluster results, small traces were found. Six years later, the company drilled another well there, and even though this one wasn't a gusher by any means (producing only about 300 barrels a day), it was enough...

The well sparked a fury of drilling in the area, but unfortunately, the boom didn't last long.

Drillers ran into the same problem wildcatters looking to strike pay dirt have encountered since the beginning: high costs and low returns.

The field, named after Abner Spraberry, is perhaps one of the most significant oil fields ever discovered in the United States.

And though Texas oilmen have known about the Spraberry field for 70 years now, less than 10% of the estimated 10 billion barrels of oil it holds has been recovered. We've been waiting for something to trigger a second oil rush.

The wait is now over.

History is repeating itself, making Abner Spraberry's $950 billion oil fortune up for grabs.

Texas is by no means a stranger to the shale revolution.

In fact, it all started in the Lone Star State. You can map out the most prominent shale plays that form this Texas shale pyramid: 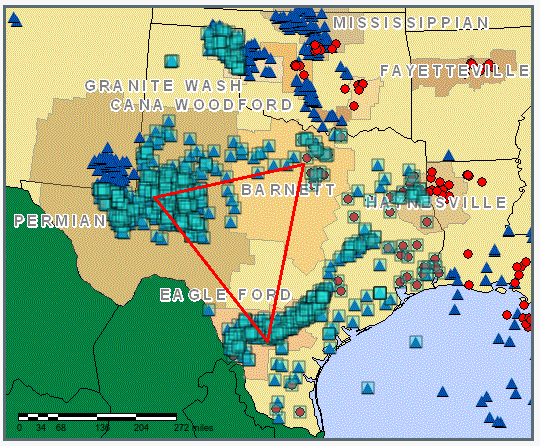 When it comes to Texas, we're talking about the most intense oil drilling operation in the world.

Right now, there are approximately 3,452 rigs worldwide, with about 24% of these rigs drilling into Texas soil!

When you break it down even further, you'll find that 56% of Texas oil rigs are located directly in the Permian Basin. Throughout the first nine months of 2013, production from Permian Basin fields totaled 921,772 barrels per day.

This oil boom comes with quite a few perks — including job growth. Back in August, the EIA showed us how much better the oil and gas industry fared during the economic turmoil in recent years...

Compared to the private sector, where employment increased by a stagnant 1% between 2007 and 2012, the number of jobs in the oil and gas industry jumped 40%. 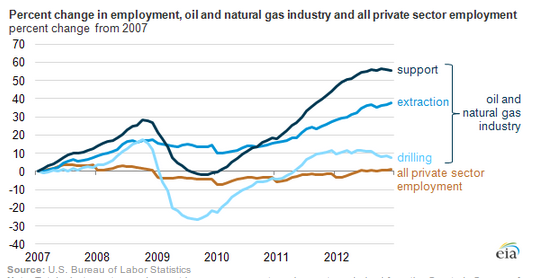 Developing these unconventional oil and gas resources is expected to add millions of jobs during the next two decades.

Don't expect drillers to pack up and leave town any time soon, because Abner's oil legacy is only the start of this West Texas oil revival...

The treasure trove of black gold buried in the Spraberry Field in West Texas also comes with one huge investment addendum: There's an even bigger pool of oil directly beneath it!

A few weeks ago, I told you there's a single phrase in today's oil and gas industry that'll elevate your investment to the next level...

It's called a stacked pay zone.

Now, I know you've seen how incredibly profitable this one feature can be for a tight oil play. It's one of the reasons Bakken producers have experienced the wild success we've seen up until now.

Essentially, companies are able to dip into several different producing formations that are located one on top of another.

So, what separates these West Texas pay zones from the Bakken?

For starters, the amount of oil is drastically different...

More important, Texas companies are only now starting tap into this 300-million-year-old formation.

We're still in the early stages of this play... and I've uncovered one small driller that is ready to break wide open in 2014.

Look for my report to hit your inbox on Thursday morning.

The Dark Side of an Oil Boom
Energy and Capital editor Keith Kohl shines a light on the darker side of the U.S. oil boom, showing investors why tight oil plays like the Bakken Shale are the last hope for oil profits.
Oil Outlook 2014
Energy and Capital editor Keith Kohl takes a look ahead at what's in store for the U.S. oil industry in 2014.
Revving Up for an Oil War
Will softening sanctions have a direct impact on OPEC's internal relations?
West Texas Crude Revival
Energy and Capital's Keith Kohl is on assignment down in the heart in the Texas' oil industry, offering readers a glimpse into Midland's next oil boom.
Hydrogen Fuel Cells: The Downfall of Tesla?
Lithium has been the front-runner in the battery technology market for years, but that is all coming to an end. Elon Musk is against them, but Jeff Bezos is investing heavily in them. Hydrogen Fuel Cells will turn the battery market upside down and we've discovered the tiny company that is going to make it happen.