A Look At Energy Management Stocks

How Saving Energy Is Returning Billions

By now you've heard about energy efficiency — also called negawatts or the "Fifth Fuel" — and the big splash it's making in the market.

Boiled down to bare essentials, energy efficiency is hot for one single reason: it has a huge return.

Last week, we covered the impact small steps can have on your home energy bill... and how you can also profit from the companies providing those solutions.

Today, I'd like to extend that theme to include commercial applications while highlighting some other avenues for profit.

The Strongest Link in the Profit Chain

Over the past week or so, the Department of Energy has made some serious announcements regarding energy efficiency. They announced, among other things:

All of this on top of a $3 billion budget for Cash for Clunkers and a $300 million rebate program for Energy Star appliances.

What that means for investors is easy pickings in the energy efficiency market. And I've been taking full advantage lately.

Take that $187 million announcement from above. It broke down like this:

And while there may be some publicly-traded plays in that group, other companies still stand to benefit as that money is spent on new efficiency projects downstream. So companies like Johnson Controls (NYSE: JCI) and Fuel Systems Solutions (NASDAQ: FSYS) — though they didn't directly receive gov't funds — could end up being the strongest link in this profit chain.

It's a little bit different on the electricity side of things...

The companies on the automotive side of things are larger, more established, and have much higher market caps... so it takes more than a gov't hand-out to send them screaming higher.

When it comes to electricity though, new, under-the-radar companies are using incentives to ratchet-up their sales, and investors are being rewarded accordingly.

Take Cree Inc., for example. This smart lighting company has been a gem all year as companies raced to cut costs through efficiency measures, and their sales and revenue soared. It's up 290% in a year — including 16% today after crushing earnings last night. Cree received some of the $37 million mentioned above and counts Wal-Mart and other stalwarts as customers.

Or take EnerNoc (NASDAQ: ENOC), which specializes in helping its customers reduce electricity use and sells this excess back in to the grid. It's up more than 340% in the past year as it racked up deals with some of the nation's top utilities and added Morgan Stanley and Johnson & Johnson to its customer base.

And it all comes back to one main theme: the huge returns energy efficiency has to offer.

I spent $200 last year and easily saved five times that on my energy bills. That's the same thing Wal-Mart, Morgan Stanley, Johnson & Johnson, and the federal government are doing... only on a much larger scale, and with much higher returns.

And investors can join the fray by owning shares of the companies providing the solutions. The returns have been pretty good, as you can see below: 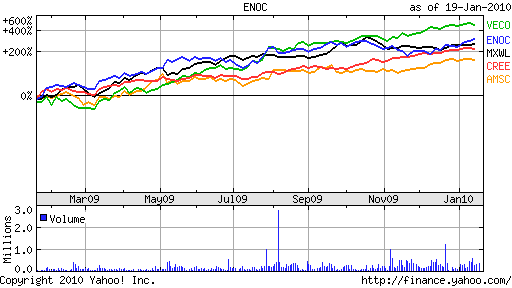 Now, the growth period for these stocks isn't over. Each one in that chart is still worth a look... just don't expect another 400% return this year.

If you missed that monster run and want another crack at a ground floor efficiency opportunity, I have a company you should take a look at. It's making a radical new energy-saving device with tax credits available for installation.

It's the same formula that led Cree and EnerNoc to huge runs last year, but this stock is still trading for under $1.00. You'll want to read all about why I think it could triple.