Look, there’s a reason you and I shouldn’t be sweating the seemingly inevitable collapse of the House of Saud.

Actually, there’s 98 million of them.

That’s how many barrels of crude oil the world guzzles down every 24 hours. 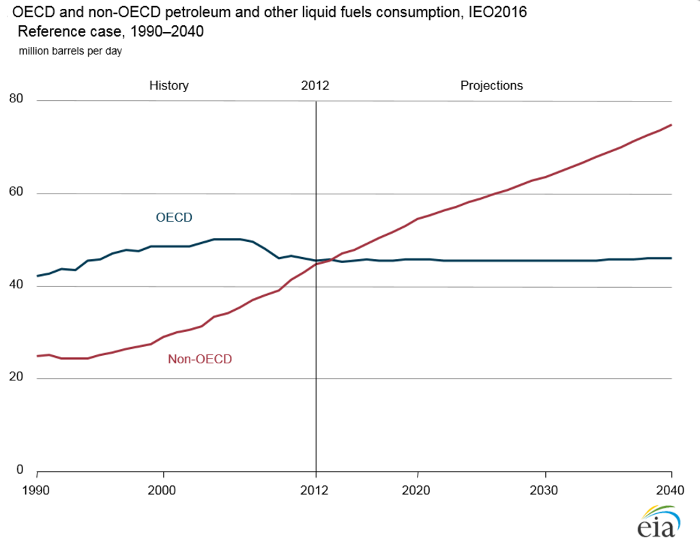 That wouldn’t be much of an issue if we could simply turn on the taps and extract more oil. That’s how we’ve dealt with that issue in the past, right?

It’s not that easy.

The world’s largest oil producers, be it Russia or the House of Saud, will be hard-pressed to keep pace.

But I’ll even play the rosy optimist here... let’s assume the world’s largest wishing well — the mighty Ghawar oil field — can maintain its current output for the next 23 years.

While we’re at it, let’s assume the rest of the world’s oil fields have similar luck.

Yes, I’ll pretend to be that optimistic.

Tomorrow’s oil is not the same as the oil that was fueling our parents’ world.

And that crude comes at a cost.

Finding a way to add another 20 or 30 million barrels per day to the global oil supply is an exercise in futility — especially with oil this cheap.

Even $100 per barrel won’t be enough to save some countries like Venezuela, a country currently on the verge of collapse due low crude prices.

Right now, OPEC members only have about 3 million barrels per day of spare capacity — virtually all of which is closely guarded by Saudi Arabia: 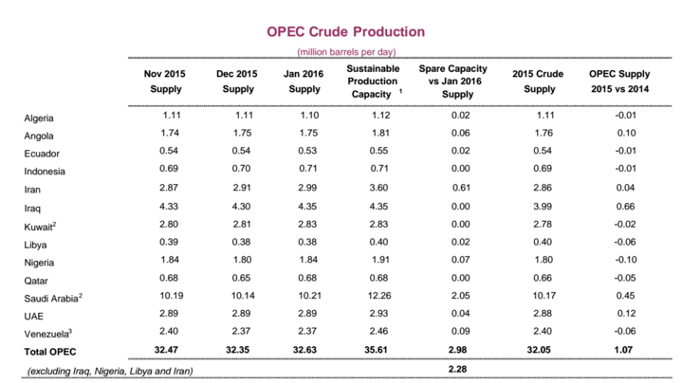 Don’t mind the fact that 40% of our global oil supply comes from only 1.5% of the world’s largest fields, or that 90% of Saudi oil production is extracted from just five fields.

Didn’t you think it was convenient that the Saudis were suddenly willing to come to the table after years of staunchly refusing to cut output?

Or maybe wonder why the House of Saud will divert billions of dollars in oil revenue that is being used to bribe its citizens into complacency with lavish social programs into an aggressive transition to renewable energy?

Believe me, it wasn’t because the Saudis are producing some of the cheapest oil on Earth right now.

And it certainly wasn’t out of good will toward fellow OPEC members like Venezuela.

No, the House of Saud could’ve weathered $30/barrel crude prices for another few years.

Instead, the Saudis swallowed their pride and took the brunt of proposed cut.

Thing is, they may not have had much of a choice given the fact that they are severely strapped for cash and ran a deficit of about $100 million last year.

If I say nothing else about Putin, it’s that he can smell blood in the water.

It turns out that Russian oil production in February remained unchanged. Putin was supposed to have slashed 300,000 barrels per day from Russia’s daily output.

So far, Russia has reduced output by about one-third of that amount, or roughly 100,000 barrels per day.

So much for non-OPEC compliance.

The 718,000 barrels that the Saudis have cut from its daily output is the main reason OPEC compliance to the November deal is around 94%.

Now, with a second potential decision to cut output looming, the posturing has already started, with the Saudis calling for “conformity by all.”

Well, all I can say is good luck with that.

Look, I won’t speculate as to whether or not a second deal will be reached. Anyone who tells you they know exactly what the tight-lipped members of OPEC will ultimately decide is trying to sell you something.

Forget the fiery rhetoric flung by both sides through the media. Ministers will posture; rumors will be strategically leaked... it’s all part of the game.

In the end, however, we’ll see exactly how much of a hard line Putin takes with the Saudis, and also how much the Saudis are truly willing to give up to avoid total collapse.

And by the time you wake up tomorrow, we’ll be well into our next 98 million barrels.