78% of Germany's Energy Supplied by Renewables

Germany's changes to its energy portfolio have been huge, and July 25, 2015 marked a milestone and a sign of future possibilities.

The country is aiming to remove all nuclear power plants by the year 2022, a move spurred by the Japanese Fukushima nuclear disaster in 2011. It also wants to cut greenhouse gases by 80% before 2050, while doubling the percentage of renewable energy in the country's portfolio by 2035. 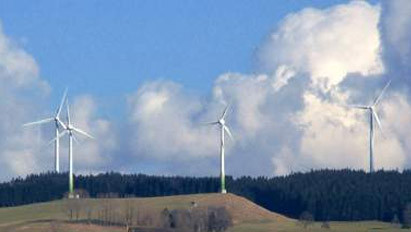 For several of these goals, Germany is well on its way. On Saturday, July 25, 78% of the country's energy production came from renewable energy.

German energy expert Craig Morris cites ideal weather conditions for this kind of achievement: stormy skies and lots of wind up north where much of Germany's wind turbines are located, and sunny skies down south where the country's solar farms can be found. This came in addition to biomass and hydro-power which boosted clean energy production to record highs.

Some have voiced concerns that, in Germany's attempt to kill off nuclear energy sources, they will have to fall back on high-emission fossil fuels like coal. Indeed, the country still gets an average of 44% of their energy from coal power.

However, Germany's push to boost renewable sources has cut emissions in recent years. In 2014, greenhouse gases dropped 4.3% year-over-year, and are currently at their lowest levels since 1990.

The U.S. has some catching up to do on this front. Currently, only 13% of American energy comes from renewable sources, compared to Germany's average of 28%.

Two American companies, IBM and the National Renewable Energy Laboratory (NREL) are working together to develop a solar and wind forecasting system that is at least 30% more accurate to help improve the efficiency of such technologies.

IBM Research Manager Hendrick Hamann states, “As we continue to refine our system in collaboration with the DOE [Department of Energy], we hope to double the accuracy of the system in the next year.”

Germany's seems to be a good model to follow going forward.

General Electric (NYSE: GE) Expanding Energy Storage Projects
Energy and Capital editor Keith Kohl looks into General Electric's plans to expand their position in the energy storage market.
The Driving Force Behind Tesla's Lithium Revolution
Energy and Capital editor Keith Kohl explains why investors should look beyond battery stocks when investing in Tesla's lithium revolution.
Renewable Energy is Killing Nuclear Power
Before the nuclear power industry goes gently into that good night, you might want to pick up a few shares of undervalued uranium companies.
Elon Musk's Lithium Revolution
Energy and Capital editor Keith Kohl reveals why a tiny energy metals company is poised to reap a windfall of profit riding Elon Musk's lithium revolution.
Hydrogen Fuel Cells: The Downfall of Tesla?
Lithium has been the front-runner in the battery technology market for years, but that is all coming to an end. Elon Musk is against them, but Jeff Bezos is investing heavily in them. Hydrogen Fuel Cells will turn the battery market upside down and we've discovered the tiny company that is going to make it happen.