The 10-year Treasury yield should stay between 1.60% and 3%, as the Fed has little room to move much higher. Furthermore, a rush to safety due to a failing European banking sector, or a Chinese meltdown, will keep a lid on higher rates.

Housing prices will continue to grow around 4% for 2017. Inventory is low, yet new buyers are hard to find, as the next wave of homebuyers range between 21 and 26 years old.

Existing home sales for 2016 came in at 5.61 million. A 4% move higher would simply be following the trend.

New home sales were flat with 560K in 2016. That said, homebuilders are now building more smaller units at lower prices. This would suggest that this number increases while total revenue grows more slowly. Housing starts are up for single-family but down for multi-family units.

3. Gold is going higher, but not why you think.

Oil fracking has changed the world in ways that will take years to play out, and it will change the nature of how we see gold.

You see, about 35 years ago, the U.S. and Saudi Arabia made a deal. The U.S. said it would buy oil from SA and protect it from its enemies. In return, it asked that all oil be sold in U.S. dollars no matter who bought it.

This meant that countries needed dollars to buy the world's number-one commodity, oil. That means the U.S. could print dollars like crazy and the rest of the world would buy them. This gave America a real advantage as the owner of the world's dominant currency, but it also gave it a $19.5 trillion debt.

But the worm turned...

This deal has eroded over time. The U.S. no longer needs Saudi oil. Furthermore, the Saudis now have a military capable of defending them. But the real crux of the matter is China.

China has overtaken the U.S. as the number-one importer of oil. Russia now sells China oil and takes the yuan/gold in return. Both Russia and China are selling U.S. Treasuries and buying gold. Russia added 168.5 metric tons in 2016, and China added 80.03 metric tons. Gold is increasing as a backer of currency, while oil is decreasing. At some point the market will realize this and buy gold.

That said, in the short run gold has hit resistance below $1,400/ounce and will likely trend sideways until July.

The price of oil is difficult to predict in the best of years. That said, when it broke down in 2014, the chart made it clear that it was going a lot lower, as I wrote repeatedly at the time.

Here is the WTI chart: 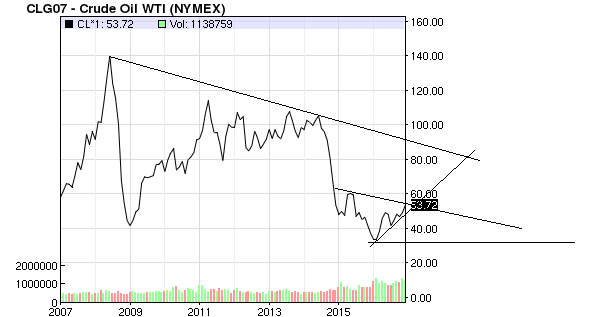 As you can see, we are trading well below the 10-year average. Reversion to the mean would suggest a price of around $75. However, the oil price doesn't move in a straight line. There are many factors that influence the price of oil, including supply and demand, the U.S. dollar, global GDP, OPEC cheating, speculation, and the growing market share of electric/solar power.

At this point it is difficult to determine the oil price next year, which is why all the Wall Street seers are saying between $50 and $60 a barrel. The answer is that if we break into the higher channel based perhaps on sustained GDP growth/repatriation of money/Trump optimism, we will see oil trade between $60 and $80. Poor manufacturing numbers and a strong dollar will see the trend between $55 and $35. If you are a short-term trader, you could buy the breakout and sell the breakdown, depending on events.

Long-term investors should wait to buy when it shows a bottom signal. I’d be a strong buyer if it bounced off $33 again.

One of the big winners of 2017 will be the defense sector. Every time Trump tweets a bad word about Boeing (NYSE: BA) or Lockheed Martin (NYSE: LMT), you should buy it.

On December 12, he tweeted:

The F-35 program and cost is out of control. Billions of dollars can and will be saved on military (and other) purchases after January 20th.

The stock sold off... 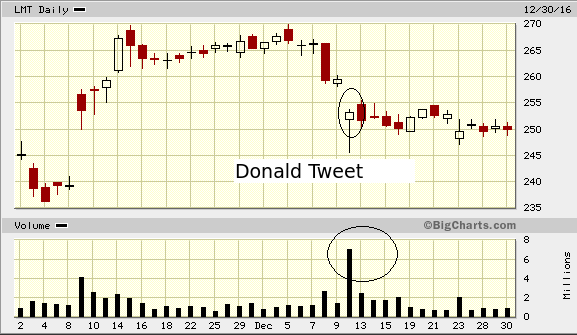 But there is little Donald can do to stop the F-35 boondoggle. And besides, the world is buying war machines at a pace we haven't seen since before the First World War.

There is a new arms race going on. Here are some facts from Amnesty International:

Lockheed Martin is the largest arms producer in the world. That said, the strong dollar will impact sales in a negative way. There are a number of countries in the world, including Japan, Russia, and Israel, which will pick up a larger slice of the ever-growing pie.

There are even a few smaller companies that make parts for high-tech systems like drones that will do well as countries modernize their forces. I will be covering these in my trading service Crisis and Opportunity.

The Banks Are At It Again
Energy & Capital editor Christian DeHaemer tells you what to buy when all hell breaks loose and the Fed/big bank cabal goes fish white, belly-up.
Putin's Gold Gimmick
In October, Russian gold buying spiked as it added 1.4 million ounces of gold to its reserves, or around 48 tonnes of gold. Here's what that means for us...
Dow on a Rampage
Energy and Capital editor Christian DeHaemer talks about the Fed, rate hikes, inflation, and the upward movement of the Dow Industrials.
Hydrogen Fuel Cells: The Downfall of Tesla?
Lithium has been the front-runner in the battery technology market for years, but that is all coming to an end. Elon Musk is against them, but Jeff Bezos is investing heavily in them. Hydrogen Fuel Cells will turn the battery market upside down and we've discovered the tiny company that is going to make it happen.