The song remains the same.

Just minutes ago as I'm writing this, President Trump did what everyone on the planet knew he would: he pulled out of the Iran nuclear deal.

Crude prices jumped 1% as he spoke.

And just like that, dear reader, we’re back on the road to $80 oil.

My colleague Christian DeHaemer warned you a few years ago that oil was setting itself up for a massive run higher.

We’ve been ringing this bell ever since crude bottomed in early 2016.

Chris and I were telling you that oil was cheap back when WTI was trading for $26.71 per barrel!

Of course, we were spot on calling that bottom.

There were simply too many bullish catalysts in place.

The looming deadline on whether or not to withdraw from the Iran nuclear deal was one of them.

Here’s what you need to know now to take advantage of Trump’s fresh round of sanctions on Iran...

What Every Investor Needs to Know About Trump’s Iran Sanctions

Look, even though everyone knows now that sanctions are on their way, I find myself wondering just how many people actually understand what that means.

Even some of the major media outlets today are reporting that although Trump is reinstating sanctions, they weren’t sure what that entailed.

They’re being lazy... how about I save you the trouble and tell you the exact details right now?

After the president’s decision today, the Departments of State and Treasury will now start taking the next steps, which include a 90-day and 180-day waiting period before re-imposing specific sanctions.

Once the first wind-down period of 90 days (effective August 6, 2018) is over, several things are going to happen.

This includes sanctions on the purchase or acquisition of U.S. dollars by the Iranian government, the country’s gold and precious metals trade, and the direct or indirect sale, supply, or transfer to or from Iran of graphite, raw or semi-finished metals like aluminum and steel, coal, and software for integrating industrial processes.

According to the Department of the Treasury, it also includes sanctions on the purchase or sale of Iranian rials and the maintenance of significant funds or accounts outside the territory of Iran denominated in the Iranian rial.

Sanctions will also be placed on the purchase of, subscription to, or facilitation of the issuance of Iranian sovereign debt, as well as sanctions on Iran’s automotive sector.

Once 180 days pass, however, the real crisis will strike Iran’s economy.

On November 4, 2018, the U.S. government will re-impose sanctions on Iran’s port operators and its shipping and shipbuilding sectors.

More importantly, this is the date that sanctions on petroleum-related transactions will take effect.

So much for that.

In short, Iran’s energy sector is in for a lot of trouble during the second half of 2018.

Although Iran’s economy will be feeling the pain from sanctions, there’s an undeniable list of winners from this situation.

And you can probably guess one of them...

In February of 2018, one state hit a helluva record.

To put a little more perspective on that number, I want you to keep in mind that had the shale boom not occurred in September of 2005, the entire United States would have been producing just 4.2 million barrels per day.

West Texas is one of the few places that can potentially boost production significantly. And considering that the region is located in just the right position to take advantage of U.S. export facilities in the Gulf of Mexico, investors with skin in the game in the Permian Basin stand to capitalize the most.

Back in February, I warned you not to get caught up in the Big Oil trap.

Had you bought Diamondback Energy at the beginning of the year, not only would your position be up by double digits right now, but it would also be poised for another surge as WTI crude rallies back over $70 per barrel.

But put your hard-earned money in a member of Big Oil like Exxon, and, well, you can see for yourself right here: 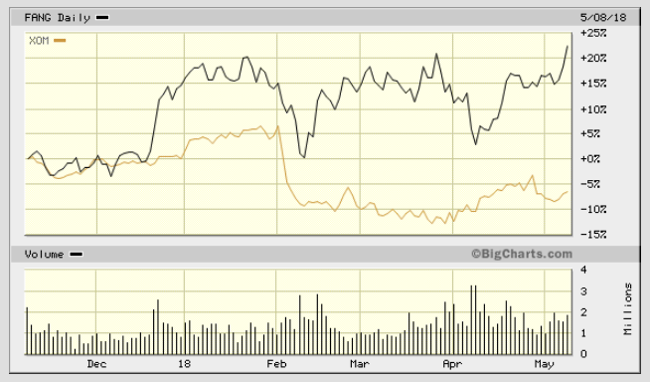 Now, I know it’s going to feel like you’re late to the party.

That window of opportunity, however, will start closing fast as the herd finally catches on to the fact that crude prices are heading higher.

In the coming weeks, we’re going to go into much more depth with these West Texas drillers, and we’ll sort the wheat from the chaff together.