Last year, I made four predictions. Here is what I wrote for number one.

The one thing I know about the markets is that when an investing trend gets a popular moniker, its days are numbered. Think BRICs and Dogs of the Dow. Crowded trades should be avoided.

Last year, the best-performing large-cap stocks were Facebook, Amazon, Netflix, and Google. These have been dubbed the FANGs, and without them, the market would have been in the red.

According to Yahoo, Amazon has a P/E of 982. According to my wife, it no longer has the lowest prices or the best selection, nor is it the only place with free two-day shipping. Also, as we live in Maryland, and Amazon just built a warehouse in Baltimore, I will no longer save the state sales tax of 6%.

Furthermore, Jeff Bezos, the famed CEO, is more interested in space and owning the Washington Post these days than running Amazon. The stock also tends to sell off after Christmas. 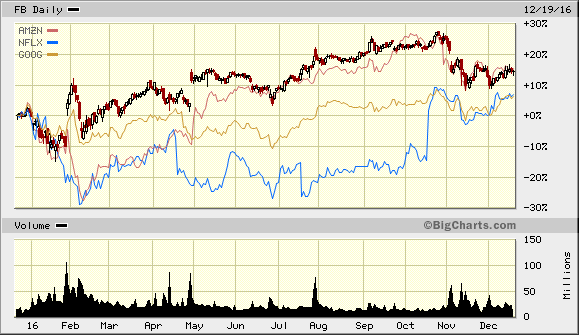 I was correct — sort of. The FANGs sold off into the new year and only came back after the recent Trump rally. The S&P 500 is up 12.84% year-to-date. The FANGs would have netted about 10%.

Ford just signed a deal with Google for driverless cars. Every car company on earth is going for autonomous autos. They will be here by 2017.

The companies that make the parts, sensors, and software to put these on the road will benefit.

My pick for this was Flextronics (FLEX). It has done well, and judging by this uptrend, it should do well next year: 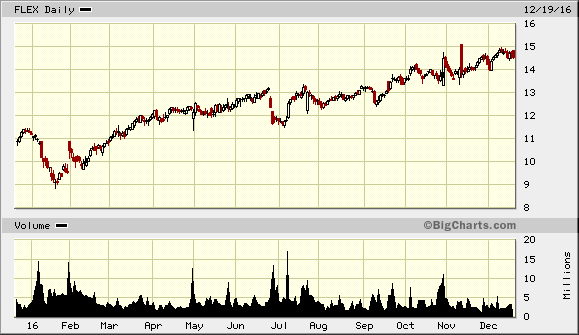 When something can't go on, it won't. Student debt is at $1.3 trillion and climbing. Student enrollment in higher education is already falling. Tuition price hikes have been halted at some universities.

According to the latest enrollment statistics, even though more people are getting high school diplomas, fewer are going to college — in fact, 812,069 fewer than in 2010.

Nationally, student debt is at $1.3 trillion and expected to nearly double to $2.4 trillion by 2025. With the Fed hiking rates and colleges hiking tuition, the trend in ever-increasing student debt is clear.

My pick on how to profit from student debt was SLM Corp. (formerly Sallie Mae). As you can see, it ended the year very well. 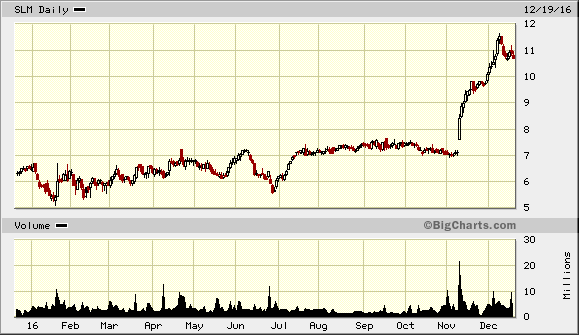 I advised my Crisis and Opportunity readers to take profits during the rally. We will pick it up again on the sell-off below $10.

#4. Iran Will Be the Best-Performing Market (I was wrong on this one)

Iran is a country with 80 million people and the world's oldest civilization...

It also has the world's third-largest oil reserves (with 30 million barrels of oil floating in tankers ready to hit the market) and a young, well-educated, and Western-looking population. The average wage is less than in Vietnam.

And what gets my juices flowing: Tehran also has the most undervalued stock market on earth.

The average price-to-earnings ratio is 5.5, and the average dividend yield is 15.8%. The total market value of the 337 companies listed is just $90 billion.

Imagine what happens when the economic sanctions are lifted in the first half of 2016. Hedge funds are already flocking to Tehran.

After an initial surge, Iran sold off and then ended the year flat.

The best performing markets were Brazil and Peru, up about 70% through September. Emerging markets as a whole outperformed with a gain of 16% — their best performance since 2010.

Looking forward at global markets, the most undervalued in terms of price/earnings ratios are Russia with an 8, China with a 7, and Greece with a 6.4. These three countries are also trading below book value. The three most overvalued countries are in North America.

In conclusion, I got three out of four predictions correct — not bad. I still like Iran for next year, as it remains the world's most undervalued stock exchange. That said, it might be time to add Russia and China to your list of potential 2017 investments.

I’ll give you my full list of predictions next Monday.